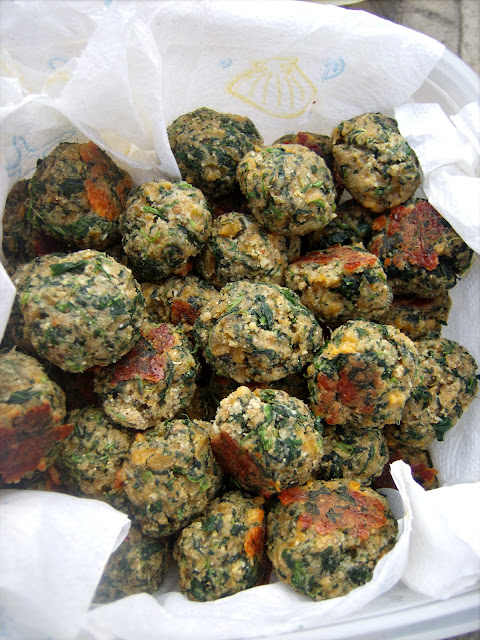 I start trying to write out a recipe and I want to put it in crochet terms: *Form into ball. Repeat from * until bowl is empty. These are vegetarian, but contain dairy (CHEESE!!!) and egg. I am a vegetarian and not a vegan BECAUSE this world has cheese.

This is not an entirely original recipe. It is actually a few recipes I picked and chose bits from and added more good stuff (CHEESE) to make them tastier (CHEESE) and more like sausage balls (CHEESE) one of those things you don't miss when you stop eating meat until Christmas and they show up at all the parties, and to make them easier because I don't claim to be a great chef but if I can throw together some pantry items and it turn out decent I call it a success. (Wow that was a long sentence.)
The idea started with a vegan recipe to which I added (CHEESE) and a stabilizer (egg) and other things that make food yummy (MORE CHEESE). Even people who don't like spinach have made these and declared them delicious. It's probably mostly the cheese. They are not really all that healthy, to be honest, because of the cheese, but they are seriously tasty and very easy to make.

I originally wrote this out for a friend an it was full of a lot of nonsense, of course, because that is how I do things. I cleaned it up a bit for the masses. I am very glad I wrote it down, though, because I am getting old and forget a lot of things. Where was I? Oh yeah. Recipe. At the end I will add the changes I have made for making them with fresh baby spinach instead of frozen. I really don't care to squeeze the water out of the frozen and I really don't like touching cold stuff, so I tried it with fresh and it tastes pretty much the same only less wet in the beginning (like all good things).

1. Run the stuffing through the food processor to make bread crumbs. (You could probably just use bread crumbs and add your own seasonings. I wouldn't know what seasonings, though.) Pour into your large mixing bowl

2. Run the garlic, onion, and tomatoes through the processor. When that is finely chopped, pour that into your mixing bowl.

3. Add the (well-drained and patted dry with paper towels) spinach to the bowl and mixed it all well.

4. Drizzle with a little olive oil and add your eggs. Mix well.

5. Shred your cheese into the bowl (or fight to get that zip-top bag open -just cut it with a knife already- and pour it in there). Fold and mix well. It should be sticky but not too wet- sticky enough to form and stay in a ball shape. Add a little water at a time if they are breaking apart (and you are now cussing about all the time you spent diligently squeezing the very last drop of the moisture out of that spinach and now you are putting some back in but oh well).

8. Allow to cool. They will firm up as they cool.
Serve warm or cold or room temperature. It doesn't matter. They are good no matter what.

Fresh baby spinach version
These stay in a ball even less than with the frozen because the spinach isn't quite as stringy- just so you know.
Everything else is exactly the same, though you may end up with a bit more than before. Don't worry. You will eat them and wonder where they all went no matter what.