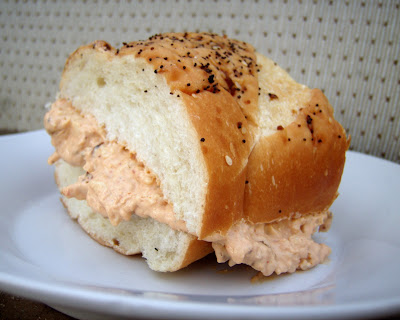 1. It is hard to find the chunky kind in the deli. I don't like the smooth kind. If I wanted smooth cheese, I would eat plain cream cheese because you cannot improve on that.
2. It is always a little too mayonnaise-y for me. I have hated Mayo my entire life. In fact, when I bought mayo for this recipe, I had to ask an older lady to help me pick some out. Sad, I know.

3. It is too mild and I will eat too much of it. Most of it. Okay, ALL of it as long as the bread lasts and then move on to the crackers and the sweet peppers and then I've used up all my quick lunches for breakfast, lunch, and dinner in the first couple of days. In theory, if it is spicier, I will eat less. So far, I am right. Don't expect me to admit when and if that changes.

4. My daughter, probably by the same genetic defect that makes her watch political commentary TV shows, says she hates pimento. I wanted to prove to her that the pimento is not the problem, the store-bought stuff is the problem. And also... (read this part really fast like I would say it aloud so maybe you would miss it) take-out-the-pimento-so-her-argument-is-invalid.

So... I decided to take a simple Pimento Cheese recipe and change it up a bit, make it spicier and fresher. This is asking a lot of cheese, but as we all know, cheese can take it. Yes, it can. YES... don't argue. Cheese is an important part of all societies, even the ones that don't have it yet. Cheese can carry a lot of weight on its little cheesy back.

Also, by my calculations, I am making about 25% more cheese spread than the largest deli container at about $1 savings. And me, being extremely cheap and generally convinced I can do things better than other people (stop laughing) decided to tackle this long list of problems in one go.

The original recipe I found on AllRecipes. It is called Southern Pimento Cheese. It's pretty basic, using a lot of pantry items. I'm not much for bottled spices of things when you can easily use the real thing. PLUS anyone that lives in the South knows it is pure folly to keep things in powdered form because the humidity turns them into cake form. DOUBLE PLUS I love to play with the food processor. It's my favorite toy that plugs into a socket next to the laptop, and that doesn't ALWAYS have to plug in, so the distinction is not very clear on this point. Moving on...

Process the garlic, onions, and peppers until fine. Add in the s&p, mayo, cream cheese and process until smooth. Transfer to a medium sized bowl and fold in the shredded cheddar carefully, mixing well, but trying to to mush it up. Chill for at least an hour. Eat.

That's it? you ask. That was a lot of build-up for something that took 5 minutes to make! If you've been following my blog for a while, you are not surprised. If you don't care at all what I have to say, you scrolled down to the actual recipe and maybe now you are reading this and wondering what the hell is she talking about. Nothing. I am always talking about nothing.

There was no pumpernickel in the discounted 'we baked too many, so you can have 50% off' rack today. (I did mention I was cheap- I do not pay full price for most things even if that means a compromise.) I went with the always-yummy 'everything' French loaf. That stuff is a carb-addict's big O. No lie. 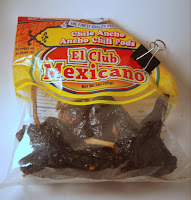 Oh- and here is a shot of the peppers. Found them in the ethnic foods section. Lots of good stuff hiding in there at good prices! That's a cheap place to buy the sesame seeds in the black bean burgers recipe, FYI. About $1 for 6oz of those. They last forever. This bag of peppers was right at $2- and there are about a dozen in there. They are considered mild, but in El Club Mexicano terms, that means somewhere between mild and medium.
Labels: condiments meals vegetarian recipe