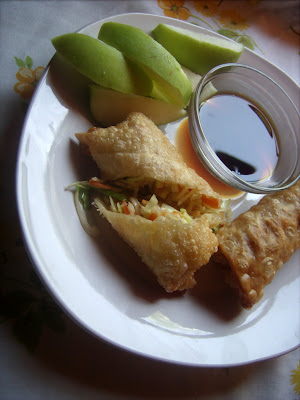 I love homemade egg rolls. All egg rolls, really, or spring rolls, but the homemade ones are so fresh and tasty. Except for the frying, they are actually full of stuff that's really good for you. They are crunchy and messy and as addictive as potato chips- but enough vitamins to counteract the grease and fat. Yippee! A trade-off! When my kids were small, I'd make these with ground beef and pre-packaged slaw mix. This was before my days as a vegetarian and food-processor fiend. It took me a while to be able to make these just for myself. I missed the texture of the meat in them, which was really dumb since it didn't really belong there. I was also unsure about the amounts of things to shred to fill them if I wasn't making a huge batch at a time. It clicked in my head one day that I could just do a stir-fry at the same time and throw any leftover cabbage mix in with the stir-fry veg. Once I stopped over-thinking it, the amounts just seemed to work themselves out naturally.

Ingredients: soy sauce (I use reduced sodium)
egg skins (sold in the produce section)
oil for frying (your choice)
various veggies for filling

This really isn't a recipe. It's more like a how-to. How to fold egg rolls, what to put in them, and lots of little tips I have learned along the way to prevent disasters and regrets. I am not responsible, however, for any regrets you have with eating too many of these at a time. I will tell you how to make a few at a time and after that, it's totally on you.

Fresh mix can be made of many things. The things I use most often are: cabbage(s), onion(s), pepper(s), carrot, broccoli, cauliflower, mushroom, bean sprouts.


There are only 2 real rules about eggroll stuffings:
It shouldn't be wet
and
it needs to be shreddable.

That probably leaves out tomatoes and... oranges? But pretty much anything else you want to put in there would work. It definitely should be something that you like to eat somewhere between cooked and raw leaning mostly toward raw. If you don't like raw carrots, don't put carrots. Of course if you don't like raw carrots you are completely insane and please stay away from hot oil and sharp things. 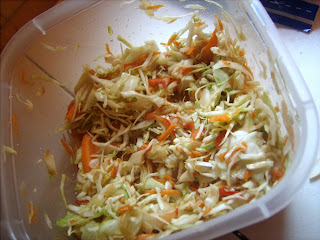 For the purpose of making this post (and veggie out [/pun] on a day after I killed myself cutting the grass), I mixed up enough to fill the egg skins I had left. They stay fresh for a couple of weeks if you will close the package each time airtight in plastic wrap or a ziploc.

I had 9 eggskins left. I shredded:
1 medium carrot
1/2 small onion
2 small peppers
a little over 2 cups of cabbage

Once you get your veg shredded/sliced finely, you douse it with soy and let it set out to reach room temperature, tossing occasionally. The sodium in the soy will cause the veggies to wilt a little, and be softer to manipulate into your eggskins. The low sodium stuff still has plenty of sodium to wilt veggies. Sadly. Salt is a tenderizer, after all. Low sodium soy sauce is not all that great, but you get used to it eventually. As someone who eats almost no salt you'd think I would be glad for any soy but every time I think 'this stuff is just low sodium because it's watered down' and it really does seem like it, being lighter in color and less flavorful.

Whatever combination you use, keep in mind that 1 cup of veg will do about 3 egg rolls. By the time you've allowed the veg to wilt, at least, that should do three egg rolls. The chutes on most food processors hold about a cup at a time, so that is a good way to measure. Whatever you can fit into the chute will fit into 3 egg rolls.

Don't quote me on that. 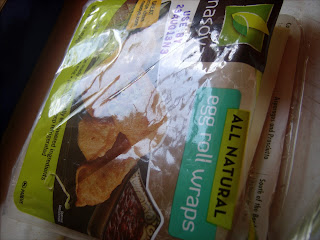 At the same time you are letting your veggies wilt, let your egg skins set out and come to room temperature. The trick to the egg skins stretching and not splitting or cracking is for your ingredients to be softened and lacking corners and your egg skins to not be cold, stale, or dried out. 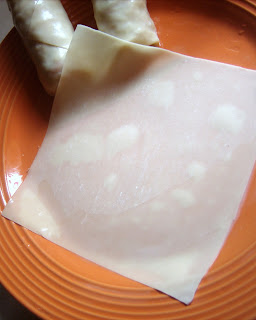 You will need a small bowl or cup of water to dip your finger into to paint the closing corner of the skin to seal it closed. I like to work on a plate- and I will 'paint' that plate with my fingers dipped in the water first. This will prevent your egg skins from sticking to your work surface and tearing. And the plate comes in handy later, which you will see. I wet that bottom corner generously, so it's still wet when I get to the rolling-up part.

Wrapping egg rolls is really easy. You don't want to put too much stuff in them- a loose fistful seems about right. Squeeze out some of the moisture back into the bowl as you go. This is not for the squeamish. Get your hands into it, people! No sissy tongs and forks! If you want to operate some chopsticks for this, go for it, but you've got to touch it anyway to roll it, so eliminate a step and just grab some filler up in your fist.

If that isn't detailed enough for you, I bet there are little pictures on your egg skin package. :D

If it tears, you're sort of screwed. You can try making patches out of an extra skin and pasting over the holes, but this is very iffy. Work with fresh skins, finely shredded and properly wilted veg and you don't have to worry about holes, tears, or patches. 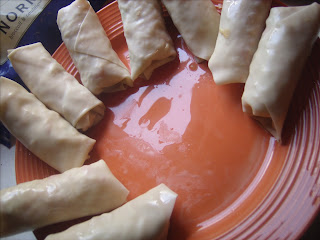 Here we have the egg rolls resting on the plate while the oil heats up. Let your oil get good and hot, of course, but more importantly, let those rolls rest before frying. Resting on an incline, like on the rim of a plate, is crucial. Pick that plate up and carefully drain any liquid off a couple of times before you get around to the frying part. This will 1. prevent dangerous splatters and 2. prevent your oil from cooling off and not getting the nice golden crisp on the outside of the rolls.

That bag of frozen veg back there has nothing to do with the eggrolls, btw. I was making up a batch of dogfood on the same day :D 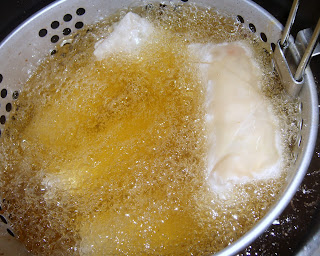 Don't crowd them. Three or four fit nicely in my small fryer basket. You want fresh oil, of course, or you will end up with gross, dark rolls. You might need to flip them with some tongs if they won't roll over on their own with a little shake of the basket. They don't have to fry long- a couple of minutes on each side- if your oil is hot enough. When they are all bubbly on the outside and a nice golden brown, they are done. Let them drain and cool. And let your oil heat back up for a couple of minutes before adding more. (That is a rule for any batch frying, by the way). 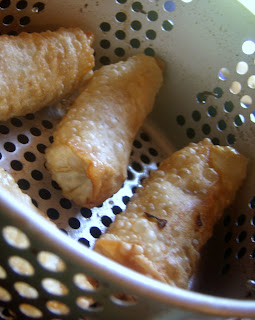 Again, drain. Drain well. Seriously. They can hold a lot of oil. Don't worry about them getting cold. They will stay warm inside for a really long time. They are going to be too hot to bite into for at least 5 minutes and probably more.

Not to mention, they are delicious cold, too. Later you will eat them straight from the fridge and think nothing of it. 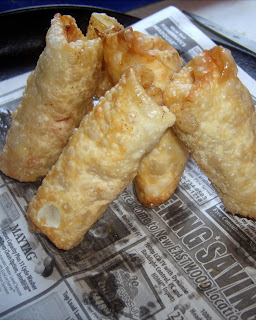 More draining. I like to stand them up on their ends in little teepee fashion to allow the extra oil to drain out. Do this when they are cooled enough to touch- after a couple minutes of being out of the oil.

A conservationist tip here: I drain fried foods onto newspaper. It is just as clean as paper towels (made by machines) and it is free. I can choose not to purchase paper towels, but I cannot stop the sales papers from coming in my mail box. This way they have a use before going to recycling or compost. I only use the inner pagers of sale papers, though, not newspapers anyone has read/touched. Some people like to use tea towels or other, but then you have to boil wash those and that's not very energy-efficient, is it? Noooo. We will save our electricity for more important things like food processors. 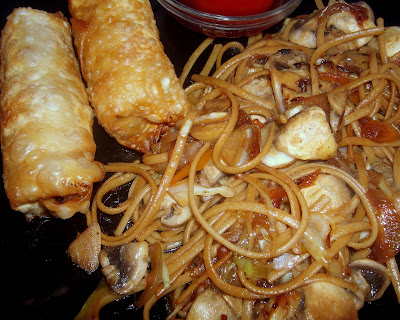 One last, not very good, picture of my dinner from the other night. I made up a cup of veg, but just fried two rolls, so I threw the leftover into what I was stirring up for the tai pan. I call it tai pan, though this is whole wheat linguini and not rice noodles, but the concept is the same and is a nice change from rice now and then. I mostly just needed to use up these mushrooms before they became less appealing. The homemade sweet and sour I concocted from pineapple juice and tomato paste (and soy and whatnot) was not good at all and I didn't eat it. I am trying to get away from bottled sauces, though. When I find a good recipe, I will be sure to share it. In the meantime, the egg rolls are just fine with a little more soy splashed on.


I hope you enjoy this 'recipe'! Next time I will make southwest egg rolls and share a picture of those/ingredients list with you. I hop you like spicy!!!


This recipe was originally published on A Dog In A Sweater (my old blog)
Labels: meals side dish vegetarian recipe