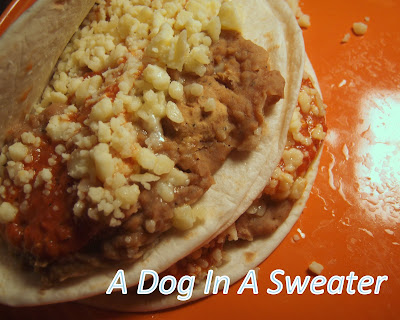 1. Rinse beans in a colander. Pour into your crockpot and add the water + broth. (I had an opened carton of veg broth in the fridge and didn't pay attention to how much was it- def. less than 2 cups. You could do this without broth or you could add bullion) to cover beans about an inch over. (maybe more if you have one of those small, deep pots- IDK)

2. Add in there coarsely chopped onion, peeled cloves of garlic, about a Tsp of cumin and salt and peppers to taste.

3. Cook on high for 4 hours and then on low or warm until you can get around to finishing the rest.

4. Drain MOST of any excess water off. If you want your beans very dry, drain it all off. If you want them runny like restaurant beans, leave more. I like mine somewhere in between so I poured from the crock without using a colander so some would remain.

5. Add in about 1/8cup of oil. Stir. How, at this point I removed about 4 cups of the beans and blended them to oblivion in the food processor. The remaining beans I mashed roughly with the potato masher. Again, do this to your liking. I like a little chunk in there but you may not. You do, however, want to stir about and be sure all the garlic gets mashed because that would be very bitter! I stirred the mashed and the blended back together, did a taste test and decided it need a tiny bit more salt and a lot more black pepper.

6. Store in an airtight container in the fridge. I suppose it would be possible to freeze some. I am taking most of these to a party, so not bothering with that. Enjoy!

In your food processor, blend the tomatoes. I left the water in. It turns out pretty thick even with the water.

Add about 2Tbsp of oil

Add the other spices to taste- just add a little and adjust as you like it. I added very little salt and a lot of the peppers. I used just a little of the cumin and chili powder and garlic. At the final tasting I decided it need a touch more salt, but I opted to add in some Louisiana Hot Sauce instead.

This does not taste like bottled taco sauce to me. It is good in a different way. For one, it is less salty and I do not care for (or need) a lot of salt. Even though these are canned tomatoes and dried spices, it has a fresher taste to it. Perhaps it was my choice to leave out the vinegar like so many sauces require. Vinegar has its place but sometimes it just tastes like something that has been preserved.

I stored this in a jar in the fridge and would probably throw it out after a week or so- or just go by smell.

Now, if I were good at things requiring a rolling pin, I would have made my own tortillas to go with but those never turn out very pretty or good. I know these store-bought ones are mostly made of poisons, but damnit I can't be perfect at everything!!

I hope you had a nice weekend, though, and got something done more than beans!

This recipe was originally published on A Dog In A Sweater (my old blog)
Labels: condiments side dish vegetarian recipe