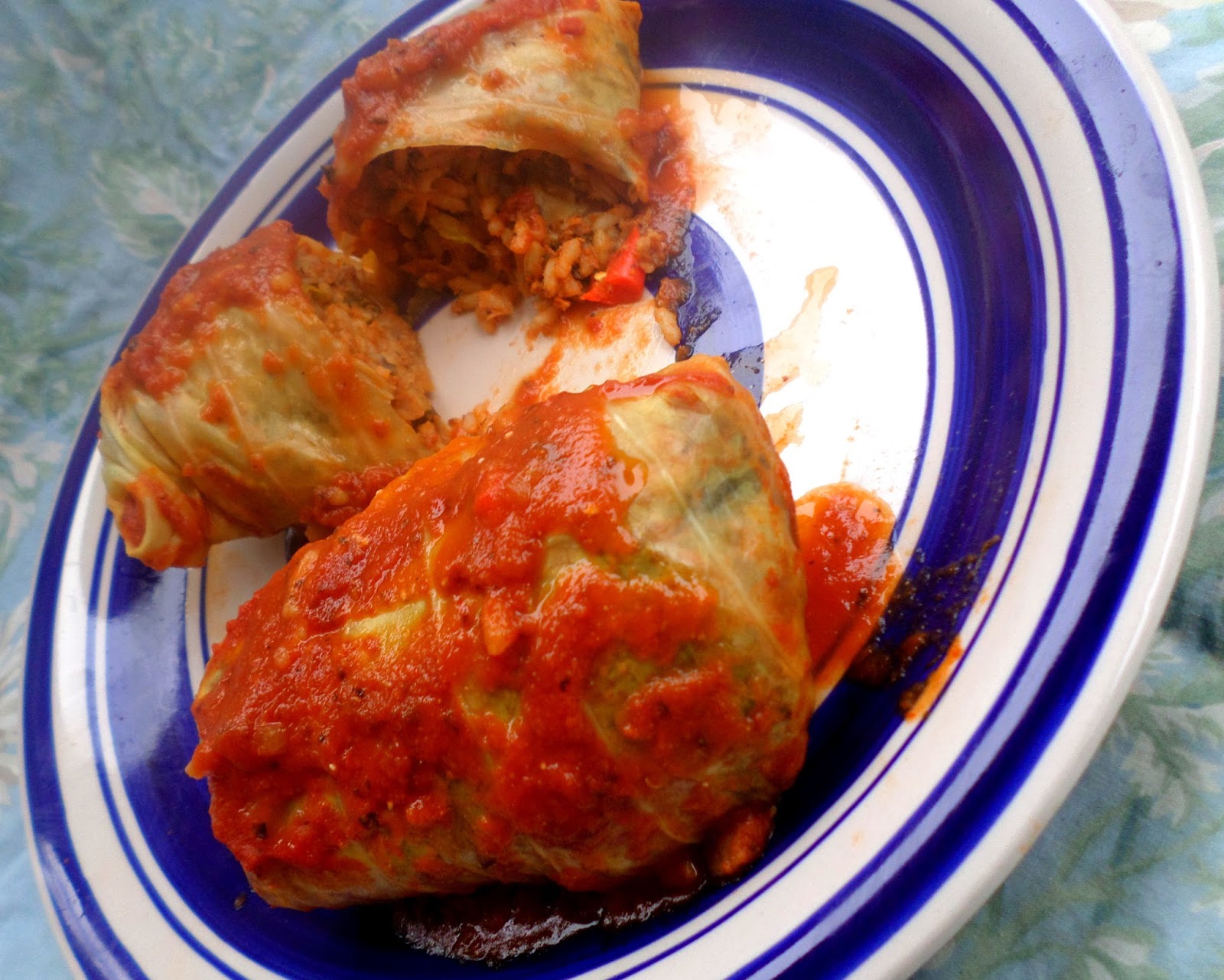 This is my first recipe on the new blog. I hadn't decided if I was going to move recipes over here or not until tonight when I ate these things and it was too amazing not to share. I guess I thought about it somewhere before then, though, since I did get some pictures of the process. I take pictures of a lot of things and only about 5% are ever seen by other people, so I will maintain that it was a surprise for all of us.

Since I gave up meat about 4 years ago, I have missed a few foods that I once loved. Some things, like Chicken Livers, are just completely out of the question, but others you think you could eat if you could just get them to taste right again. Some things I have found better versions of, but some I have not. When you try to make food healthier- and just leave out the meat- it sometimes is just not the same. You can either do without or you can keep trying. Cabbage Rolls were definitely worth trying again. Or just downright giving in to the old recipe with just a few small changes.

Nobody taught me to cook. My mother died when I was young and even though I do have older sisters, they were significantly older (or so it seemed at the time) and were off at college or married. I was married myself before internet days and most of the things I tried were out of one of those cookbooks that the ladies of a church get together and compile. I had this old worn out copy- it was spiral bound and had no cover so there was no front or back or page numbers so it was just like a disorganized rolodex of recipes that may or may not have actually been any good. I don't remember learning anything particular out of it but for a cream cake filler (that I wish I still had!) But when I think back to teaching myself to cook, I think of that book, so it must have had real significance at some point.

Everything else I ever learned to cook I either just made up or else came from much more complicated, gourmet-ish magazine-find recipes that I fiddled with and simplified until I could consistently make them without screwing it all up. I am not sure where my Cabbage Rolls recipe originated, or if it was just born in my head after some small seed was planted, but it became a favorite with everyone.

We did not grow up eating cabbage rolls. They were probably a little too unAmerican for my family. I am not sure what that means at all, really, since America is everything mixed together. I absolutely love cabbage, though. When I learned there was a meal completely encased in cabbage, I set about finding what was supposed to go in it and then, as usual, what was the quickest and easiest way to manage it. Pantry ingredients were a given, of course, and so was cheap. This is the recipe I came up with and has only been tweaked a little from the original. (Though considerably tweaked from the version I used to make for the whole family who were, sadly, sometimes a bunch of whiny veggie-haters.)

I have tried cabbage rolls meatless and from other recipes since. I have tried to make them healthier. They just weren't the same. I still missed them. AND I didn't much care for what I had cooked- and now had to eat until it was all gone because I pathologically cannot waste anything. That's probably a good thing, but still: It is very oppressive sometimes.

I am not here to say anything bad about any of the ingredients. To be honest, they are probably all better choices than drive-thru food, but for my particular dietary needs (namely low sodium) this meal is a huge indulgence. I will probably have to pop an extra pill because of these things. But it was worth it. I had not had real cabbage rolls, as I had come to love them, anyway, in several years. And they are real. They are the real deal, only better, because now I am free to pack more stuff into them without kids or the Ex saying ewwww.

This is a big recipe, though- and I am not even going to think how to divide it. I will just cook it all and eat them until they are gone, which will take a few days. More time to crochet for me, though, so that's the way I like to cook anyway. I would say I will get 6-8 meals out of this, depending on how big the individual rolls are and if I did or didn't skip breakfast. More times than not I do skip breakfast. So... yeah. 3 more days of cabbage rolls! Yay!

Tools:
1 large casserole dish or lasagna pan or some combination of smaller pans to equal this
Lid for this or aluminum foil
Big microwave-safe bowl
Plastic Wrap
Mixing bowls
Big ass knife and Cutting board, etc.

Ingredients:
VEGAN SUBSTITUTIONS in red
1 large white cabbage. (Biggest you can find that will fit in your big microwave bowl.)
Fresh mushrooms (6oz?)
Red bell pepper(s) 1 medium or a few of the little ones
1/2 a small onion (I use purple onion for everything these days. Thanks, stomach)
2 large cans of spaghetti sauce (has to be cheese or mushroom- no meat!)
Pepper, cumin, any other loved herbs or spices (I left out any extra salt, but you may want it)
Something green for color (I had some spinach that needed eaten soon, but maybe parsley?)
12oz package of Morningstar Meatless Crumbles GARDEIN or BEYOND BEEF are vegan
1 box of boil-in-bag rice (I used 3 of the 4 packages and was more than enough)
olive oil spray (or other)
2 eggs Flax Eggs or omit
water

Do it:
First thing, bang the cabbage stem into the counter really hard a few times. This sort of starts the process of getting the stem out. And it's fun. Then I cut into it with my big ol' knife at an angle coming from 4 directions. Get that stem out of there and begin to set the leaves free from the bottom. May require more stabbing and slashing. It's therapeutic. Don't tear off any leaves yet, but cut away to where they start being leaves and not stem.

Put the cabbage in your big bowl with about 1/2cup of water and cover with plastic wrap. Stick it in the microwave for about 3-4 minutes at a time, slowly softening up the outer leaves. Remove the cabbage, carefully peel the soft leaves off, and stick it back in there. Repeat until you are down to leaves too small or curly to do anything with. I tried for a dozen and got like 18ish, some of which I couldn't use because they tore too badly. (You may have some better big pot with a steam basket for this, but mine is not big enough for Goliath the Cabbage, may he rest in peace). 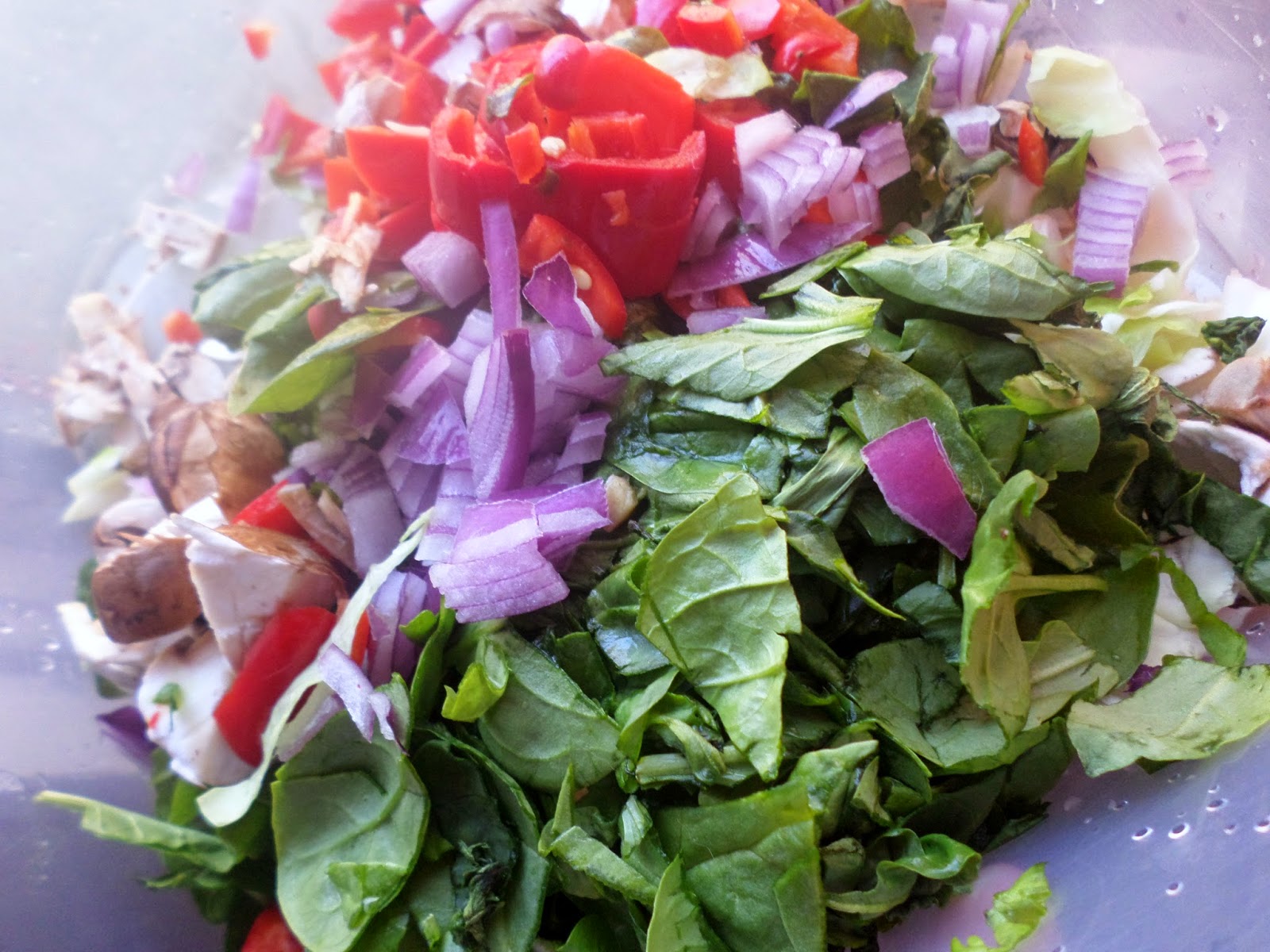 While your cabbage is slowly softening, (the leaves you peeled off resting elsewhere- like your casserole dish to save on clean-up) start chopping veg. I always chop a little cabbage, too, since some will be torn or too small to use or just leftover.

I put the cabbage leaves back into the microwave by themselves after I had a good pile of them and zapped them a few more minutes to soften them a little more. These are wonderful to hold and play with when it's as cold as it was here today. They should make gloves out of steamed cabbage leaves. That might make it even harder than usual gloves to open doorknobs or tie your shoes. And very likely funky-smelling. 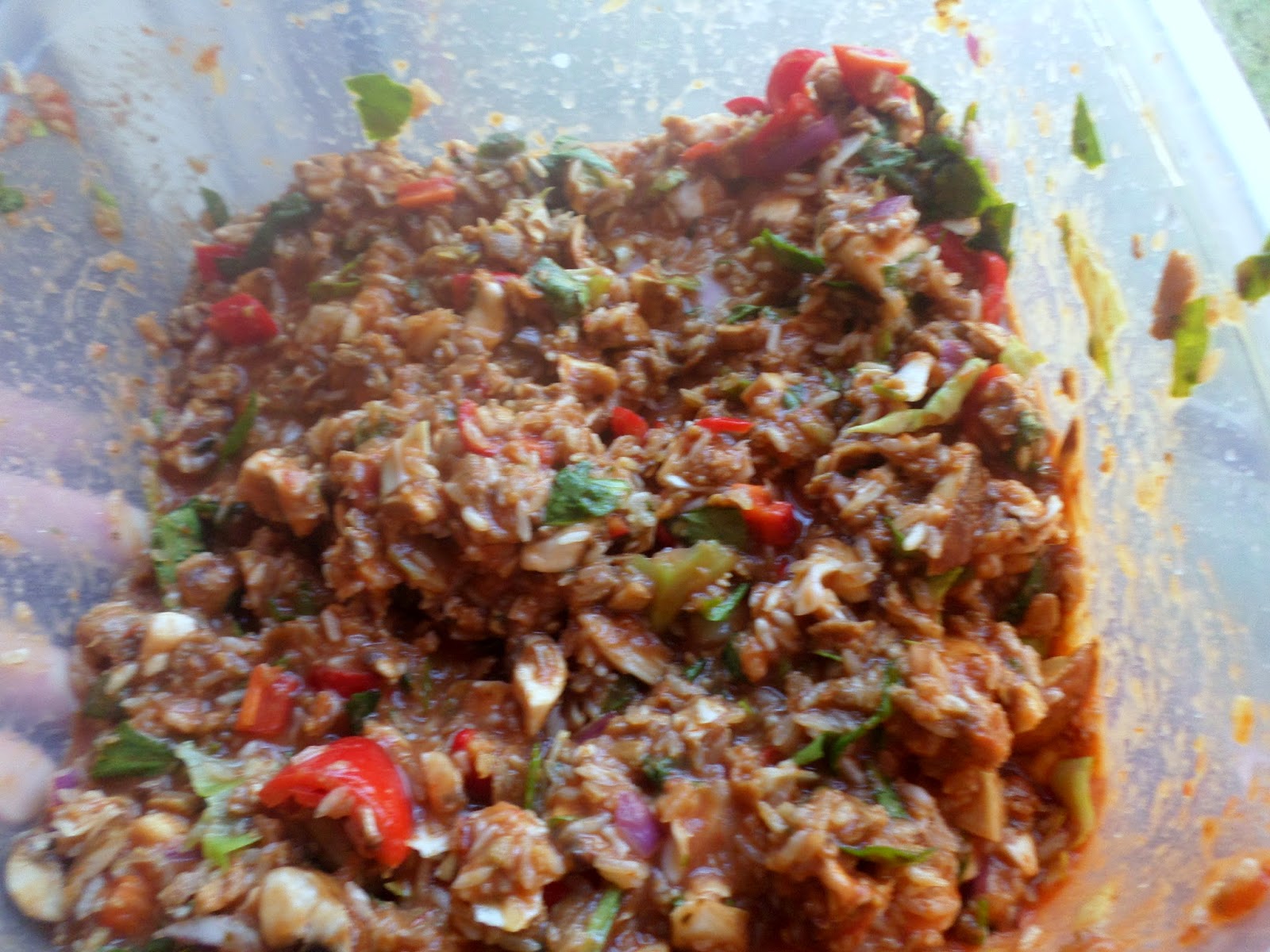 The meatless crumbles I zapped for just a couple minutes to break them up a little and make them stirrable. All that went into a big bowl with 1 can of the spaghetti sauce, black pepper, cumin, and the eggs. I opened the bags of dry rice and dumped them in, too. (I prefer this rice for these because it gets done faster than enriched rice but it doesn't blow out and get mushy like instant.) Mix it all up and then add water and stir and add more and stir until you get it a nice, thick pasty consistency without it being soggy.

Spray your dish(es) and start rolling up your cabbage leaves with a generous spoonful of mix inside. It's just like rolling buritos, only you don't have to worry if it just barely closes up. Hold onto it well and get it into the dish with the seam-side down. Repeat until all the stuff and/or leaves are used up. Pour the second can of spaghetti cause over the whole thing and then add about 1 cup of water to the bottom (total- like if you used a big pan- 1 whole cup- in smaller pans, split it up accordingly). Cover with foil and poke 3 or 4 holes in with your knife to let steam escape. The holes will stop it from condensating too much and dripping over the sides. 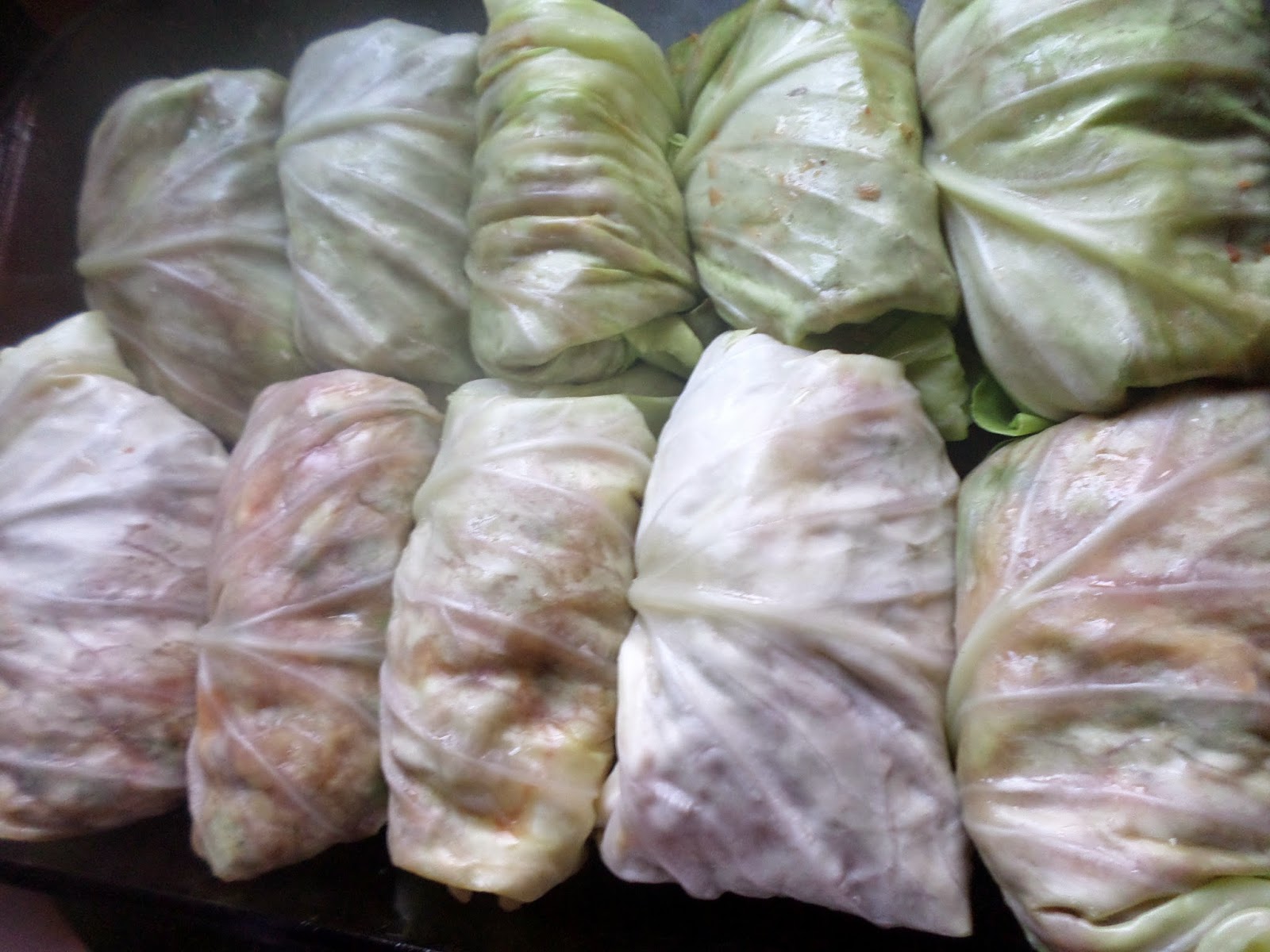 Bake at 350 for 1 hour. Check it about halfway through and then 3/4 through to be sure it's not gone entirely dry (you should hear the water boiling a little). Add a touch more water if needed. After 1 hour, you can remove the foil and let any extra water cook out- or like me just hurry up and eat the dang things.

I like a little sprinkle of Parmesan on top. Which did not make it into the picture retake- my leftover lunch the next day because the original picture was suffering from something I like to call crap weather.

These are really good with some garlic bread, by the way, if you don't mind more carbs. My garlic bread may or may not have been used up for quick pizza breads before I got around to making the rolls.

I hope you enjoy! And let me know if you tried any other ingredients and how you liked it! Mine were fantastic and now I want to go to bed so lunch tomorrow comes all that much faster!