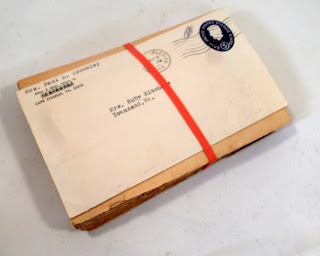 It is always a pleasure when my neighbor, a very kind elderly lady called Lilian Ponders, knocks on my door. I have never had such good neighbors in my life- kind and friendly and helpful. Lily, as we call her, lives with her sister who is just older than her, and her daughter, Rebecca, who is my age. Rebecca has cerebral palsy. Lily has devoted her life to caring for her youngest child, so it is not really surprising that she is giving and thoughtful to everyone. Whenever she makes vegetable soup, she brings me some, as she knows how much I love my veggies. When I get in the mood to bake something, I put half of it off on her so the calories are spread around more reasonably. In the summer I cut her grass when I am cutting mine. She lets me borrow her hedge clippers. She knows where my shovel is kept and is welcome to use it anytime. We've built tomato cages together and helped each other clean up the yards after a storm. And her sister, Lena, is always full of good gossip and can always make me laugh. Just really good neighbors.

This morning she had an extra special kind of gift, and I think she didn't know just what a treasure she had found. She has picked up yarn for me at yard sales before. She tries to refuse the few dollars repayment, but we both know I will insist until she does. This morning, however, she had a box of stuff and I could see knitting needles poking out and I got really excited. Her $1 yard sale find, she claimed. I am not sure I believe her that it cost so little. I think she has outsmarted me at last.

But this isn't a story about me. This is a story about some lady, now gone, that had a love of knitting. As I opened the box I was completely overwhelmed with the history of some stranger, some woman, like me, that loved her yarn and could not get enough of knitting and crochet. There was little yarn, but oh so many tools of the craft. Many still in their packages, possibly never used, but still loved and - as every stitcher knows - definitely needed. Every bit of it smelled like sweet, fresh cigar as she had stored her crochet hooks in cigar cases. 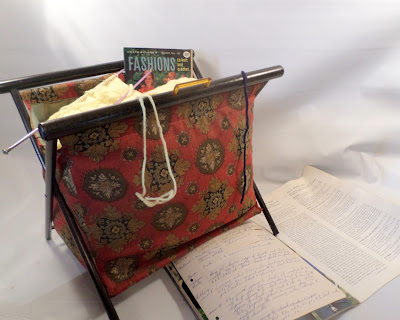 The biggest part of this treasure was this beautiful project standing bag. It has one tiny tear near the top, but otherwise in excellent condition. Inside were pocket full of goodies, some booklets, and a yellow cabled sleeve just begun. The second needle was still stuck through the stitches, waiting to be picked up again.

I began to wonder just how old is this stuff? Where did she live? Was this beginning of a yellow sleeve intended for a grandchild? What other gifts had this woman created over the years in love and obvious skill? Did those recipients know just how precious that time spent, the anticipation of seeing smiles motivated the movement of her hands? 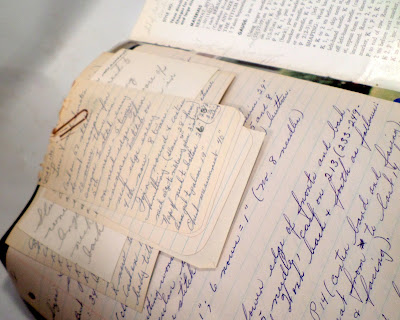 Hand-written patterns here, paperclipped in side of this booklet. 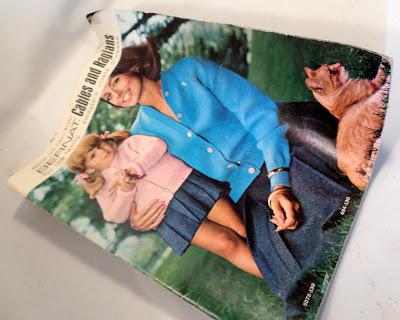 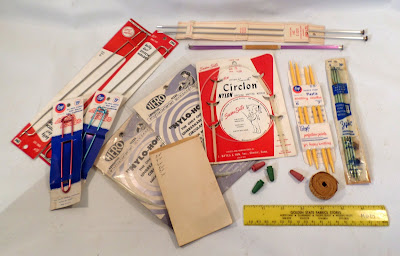 There was a small collection of circulars and double-pointed needles, some still in their packages. The stitch holders look just like the ones we use today, except I have never seen any quite that long. They say they are for bulky yarn. The little rubber point protectors have long since hardened. Those were down in the bottom of a pocket. I was amazed that everything was still in its proper pairs or sets. I didn't dare try to unroll the measuring tape. The small plastic ruler say 'Golden State Fabrics' and someone has written 'Mom' on it in permanent marker. I imagine her fussing at kids stealing her ruler the way my mother, a seamstress, had ranted about us kids taking her scissors. There was a little notepad she was using to keep counts - possible for when to put in the cables on the yellow sleeve. 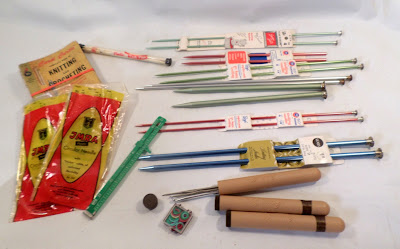 More circulars, still in their package, a great deal of straight needles, a small gauge ruler, cigar cases holding tiny crochet hooks, and a box of stitch markers almost identical to a box that I have today. Only they came in more colors then. There was a small case of double-pointed needles. Also included, were several more of those cases, though they were empty, but now I know what they were for. A thick little book of knitting and crochet patterns, held together by a rubber band, its spine long worn to nothing. This was the best find of all. 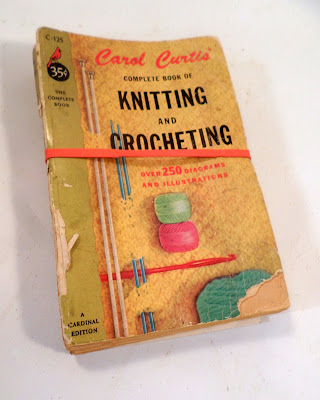 This little book finally gave me some clue to the lady this entire treasure had belonged to. Dated 1965, on the back of which, held on by the rubber band was... 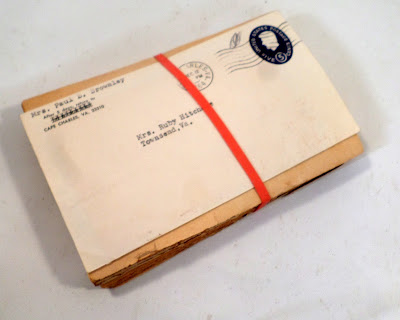 A letter. To Mrs. Ruby Hitchens of Townsend, Virginia. 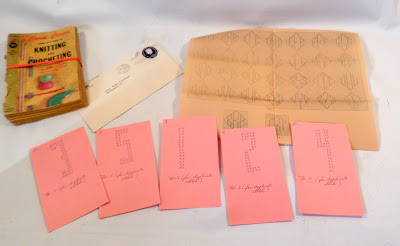 Inside was a very fragile page showing various monograms and a few hand-drawn loose-leaf notepad pages with the numbers 1-5 drawn out in graph-form. They were labeled 'for duplicate stitch'. What had Mrs. Hitchens of Townsend, Virginia been making that she wished to add letters or number to? I guess I don't have to say how tickled I was by finding her name... 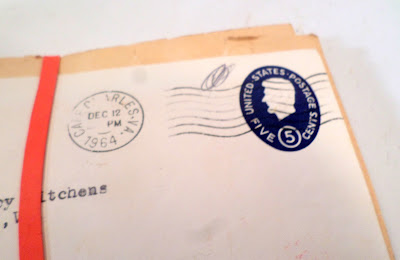 And seeing this December 12th, 1964 postmark from Cape Charles, Virginia from Mrs. Paul B. Brownley to her friend. Note the 5cent postage. 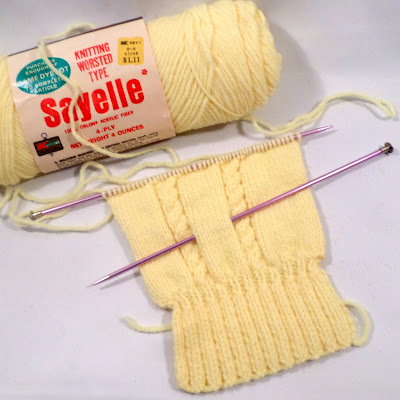 Mrs. Hitchens, wherever you are in the afterlife, I just want you to know that I have your knitting treasure and it will remain intact and in a place of honor in my studio. We were sisters, even though we didn't know each other, because we share a love of this tradition that goes back further than either of us can comprehend. I think I will have your little start of a sleeve framed just like it I found it with  the needle left waiting for you to pick it up again. Thank you for leaving this for me to find someday and give me happy wishes that some years from now another knitter will unbox my treasures and for a day, at least, wonder what kind of person I was.