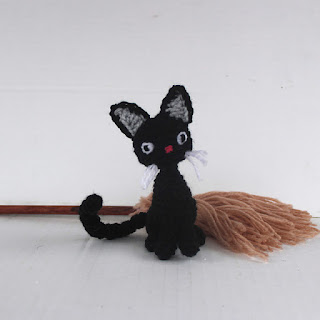 I don't have a great deal of time to make presents anymore, but this year I was determined to make that time. Clemmie had been asking me since April to make her a doll from her favorite movie and every time Sully watched Peter Rabbit, I think I really have to make that Benjamin Bunny Hat.

Clementine's favorite movie is Kiki's Delivery Service. She has a Studio Ghibli- loving mother, so it's not super surprising a 5-year-old American girl loves a Japanese cartoon from the late 1980s. She has a big Kiki picture on the wall of her bedroom that she has shown to me countless times and asked me all year 'When you finish this caterpillar/dog, will you start on my Kiki doll?' I finally began telling her it would have to be a Christmas present, and it was a promise I definitely had to keep. So I stopped taking orders this year early enough to give me time to make gifts... which began with a hat for Sully because Kiki really needed a lot more thinking time! 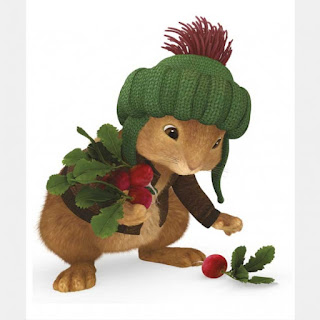 Beatrix Potter's Peter Rabbit is one of those books in public domain. Unless the author's family renews a copyright on a work after the author's death, it passes into public domain. This applies to books and movies- and why you will see cheap paperback versions of classic literature of $2 dvds of Charlie Chaplin movies. Because of Public Domain, many versions of Peter Rabbit have emerged since the original stories and  illustrations by Beatrix Potter. One of these incarnations is a Nickelodeon cartoon called Peter Rabbit and Friends. It's a show with a bad guy and lots of chasing and hiding and close-calls, which my granddaughter finds scary, but my grandson, going on 3, thinks is fantastic. We often watch this show when Sister is at school, and spared from the action-scenes that make her anxious.

Peter Rabbit's little cousin is called Benjamin Bunny, and wears a fabulous knit hat. Every single time we watch this show I am daydreaming about knitting this hat. When the time came, however, I decided to crochet it. Why? Because a. I am a very slow knitter and that was going to take a  lot of ribbing to fold up into that band and b. a lot more people would like a crochet version than a knit version. Am I right?

The colors of my hat are not quite accurate as I had this really plush olive green that I wanted to use. The hat would look great in any combination of colors, with or without the ears. It is a very thick and warm hat, and very stretchy, so should fit for quite a while!

Was he crazy about it? Not really. He's at that age where he wants to make his own decisions about what he wears and when and usually that decision is 'nothing, no way'. It is rarely very cold here, but when it is he is happy to have a hat. I trust he will appreciate the coolness of it sooner or later. Because it is really cute and with a little bribery I managed to get a picture of him wearing it. Toddlers aren't really into modelling, as it turns out. My pom-pom is as messy as I could stand to make it, which means it looks about how my pom-poms usually look. Sending this pattern into testing next month, so maybe it ends up on the head of a few kids that are a little happier about it! 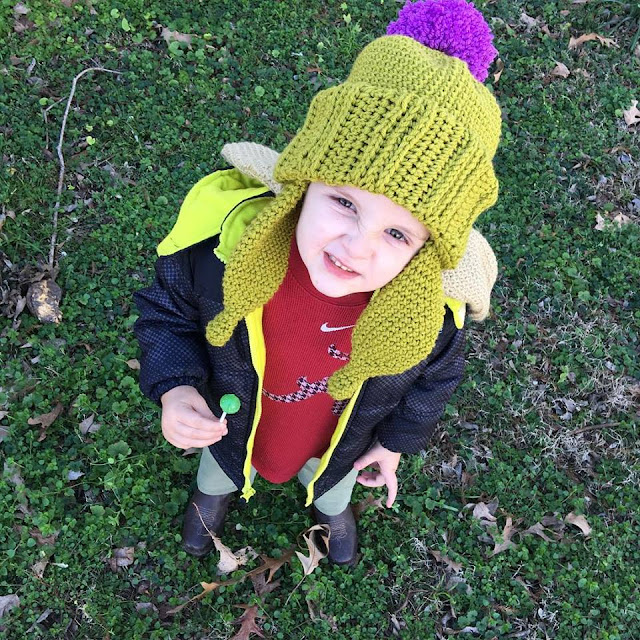 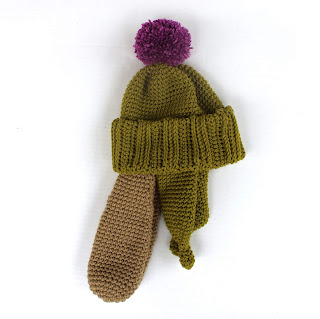 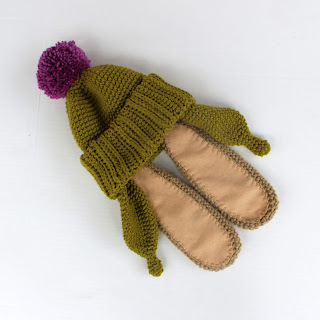 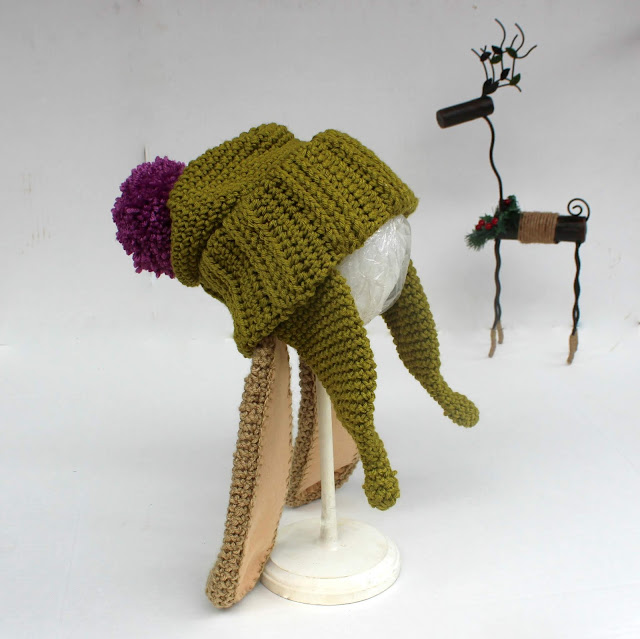 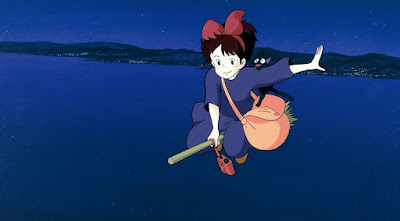 So on to the Kiki doll- which is always a challenge for me because I don't have that natural ability to cutesify things and tend to lean way toward realistic and fall short onto accidentally 'kind of cute'. I have made very few people dolls and trust me I went through tons of patterns trying to find one that would work with my chosen materials and goal size. No such luck. I ended up basing my doll on the patterns from the Amigirume book by Allison Hoffman. I've never actually used this book because it's rather confusing and lacking a proper index, but I do find it useful to see how she SHAPES things.  I used #2 yarn and a tiny hook and wanted a 12ish inch tall doll, so these patterns would not work for my purpose, but I did like how she shapes her body parts, so studied the patterns and mirrored my shaping to hers. 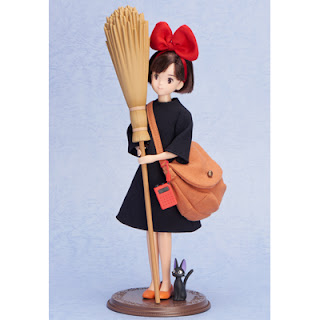 Some time ago I found this doll figurine online, which is a collector's edition from several years ago. When I first looked, I found one for sale for over $2K. Definitely not for a kid. But I based my doll, etc. on this figurine. The first problem I ran into, however, was that my head in ratio to the body looked ridiculously small once I put her dress on. I had seen a documentary once of Barbie where they explained how they made her long and thin so that once they put the clothes on her she looked normal. SO I made the limbs longer, almost double the size of her head, and made her neck longer. It was perfect!

The cat is called Jiji and I was especially proud of him. I might make that a free pattern. I will need to remake one, though, as not sure that I wrote down all of his parts as I was going. The broom is a dowel rod, yarn, and a lot of hot glue and the radio is embroidered plastic canvas. I found a 'K' bead in my button box that made a perfect closure for the satchel! My only true regret is that the broom is out of scale and I wish I had taken the time to remake it, but since this is on display now an not really being played with, it is probably okay. Or that's a project Clemmie and I can tackle together sometime soon. 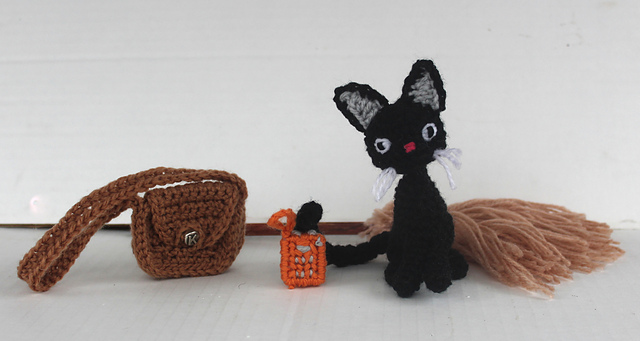 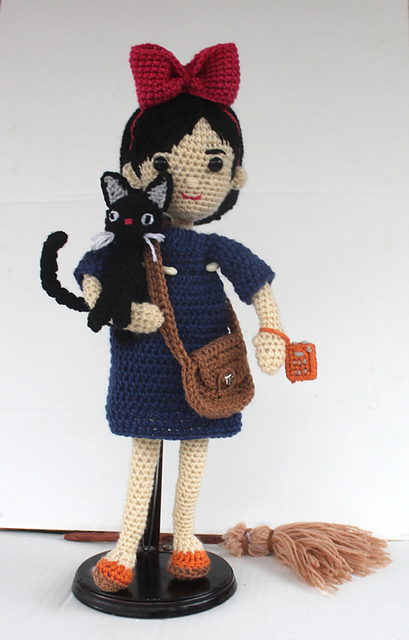 We hope you all had a VERY MERRY CHRISTMAS! 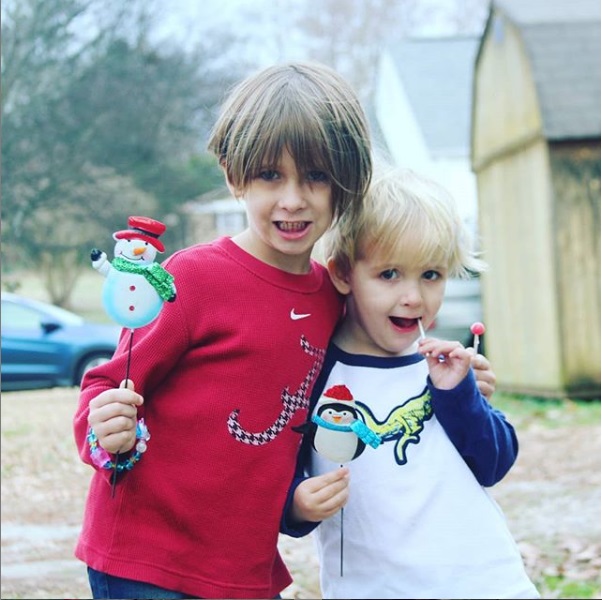