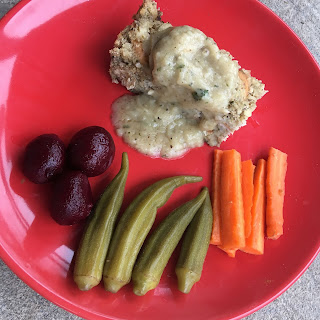 I went through the holidays really wanting to veganize a traditional chicken and dressing, but pretty sure someone else in the family would bring a vegan dressing to one of our many gatherings and did not want to step on their toes. As it turned out, nobody brought any vegan dressing or vegan stuffing so I went through the entire holiday season not having my dressing itch scratched in the least. I was also seriously off my cooking game recently and some of the dishes I made flopped or I ruined by falling asleep and letting them burn (I really shouldn't cook so close to bedtime!). The one thing that I contributed that people actually ate was a pan of sweet cornbread (see my chili recipe for that one), though my daughter said it was basically just cake. She doesn't care for my cooking in general, though, I think. Someday I will tell you how she adulterated my guacamole on Christmas. (haha)

So today, going into my last free weekend as the crochet orders have began rolling in again, I decided to tackle the whole vegan 'chicken' and dressing thing. Now or never, it seemed.

This took all day.

Seriously. I stood at the stove and stirred gravy until my back hurt. I am not used to making such a huge amount of sauce at a time and it takes a while to heat through!  In the future, I think I'd do some of the prep for this recipe the day before.

So... traditional chicken and dressing. It had been a while so I looked up a recipe to remind myself the ratios and the seasonings. This one is almost identical to how I remember it being made, though I am sure we never added eggs.  I based my amounts on this recipe, though I switched some of the combos. I made a gravy to take the place of  broth and cream soup and in my mind dressing has both cornbread AND biscuits in it. Next time I make this (now that I know it works), I will get more pictures, but for now I really just want to write this down before I forget what I put it there!

Before you begin, you need to make the Cornbread and the Biscuits. Go ahead and make the gravy, too, so it can cool before assembly.

Mix all this together and pour into a greased/sprayed 8" pan. Bake at 450F for 20-25 minutes or until golden brown. Allow to cool.

Whisk first 3 ingredients together. Add in oil and stir through. Add milk and stir to get a very sticky dough. Add more or less milk in small amounts as needed to get right consistency. Spray a baking sheet and spoon out 6 biscuit-shapes (they don't have to be pretty). Bake at 425F for 12-15 minutes or until bottoms are browned and cooked through. Allow to cool. 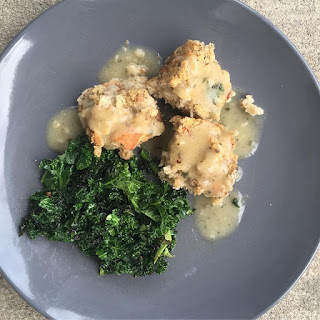 Mix first 4 ingredients together. DO NOT ADD salt and pepper at this time. The bullion is pretty salty, so you will want to wait and taste the gravy before salting.
Over medium heat, make a gravy by melting/heating the oil/butter, mixing or whisking in the flour mixture and allowing to cook briefly until aromatic.
Gradually stir in the broth, continuing the stir and scrape the bottom of the pan while it heats through.
When it begins to simmer, slowly add in the milk and bring back to a simmer.
YOU MUST STIR CONSTANTLY THIS ENTIRE TIME.
When at a full simmer, the gravy will begin to thicken. Allow to thicken to about a ketchup-consistency.
Remove from heat. NOW you will want to taste and add any salt and pepper.
You can always add more seasoning to the dressing mix later if the bread tampers the flavor.

Here is a (all-purpose) video on making a gravy if it completely new to you. You can use all oil if you can't find vegan butter.

IF YOUR GRAVY DOES NOT THICKEN, make a slurry of 1/4 cup of water and 1 Tbsp if corn starch, then stir that in while the gravy is still at a simmer. It will thicken very quickly with a slurry, so be ready to remove from heat at any second!

-----
Now that you have the cornbread, biscuits, and gravy prepared, you can prepare the last 2 items.

- I sauteed the Seasoning Blend in a non-stick pan to thaw and until slightly translucent.
- I baked the Chick'n strips on a cookie sheet for about 15 minutes until thawed. Allow to cool and then slice each strip length-wise and cut into 1-inch long pieces. I then baked them about 10 more minutes to get a little more texture/browning to them.

-----------
The Dressing
In a large bowl, crumble and mix together everything except the gravy. Begin to add the gravy- about half at first. Stir through and add more gravy as needed. I had about 2 cups left at the end. If for some reason you run out, make up some more broth and add that. You are aiming for a thick paste consistency- it will make a slurpy wet sounds as you stir. Taste for salt and pepper and add more if needed.

Spray your 9x13 baking dish and spread the mix evenly. Bake at 400F for one hour. If your oven notoriously browns things quickly, you will want to cook cover for the first 1/2 hour.

Allow to cool for 10-15 minutes before slicing. Serve with leftover gravy, cranberry sauce. Tofurkey, veggies- whatever you like!

RECIPE STARTER: I don't really care for celery, but the flavor works well in this recipe. To keep from ending up with a lot of celery I am not going to eat, I buy this small bag of frozen. Also, it cooks up more tenderly than fresh, which is a plus for me since it is the texture I really dislike.
Substitute: 1/2 onion, 1/2 bell pepper, 2-3 celery stalks, all diced

CORNMEAL: For some reason, it's difficult to get plain cornmeal here. I was lucky to find the self-rising. You probably know to add baking soda and salt if you have plain.

ENOUGH CHICKEN? I think I will add double the 'Chicken' if I were making this for a crowd. I like the bread parts best, but most people would expect chicken in every bite.

MUFFINS? I think I will make this in muffin tins for the next family Christmas dinner. It will be so much easier to serve and eat that way as well as get a lot more browned edges, which is the best part! If  I do this, I will update with the cooking time!
--------------

Since I broke that up by recipe, I will add it all again in one shopping/check your pantry list: