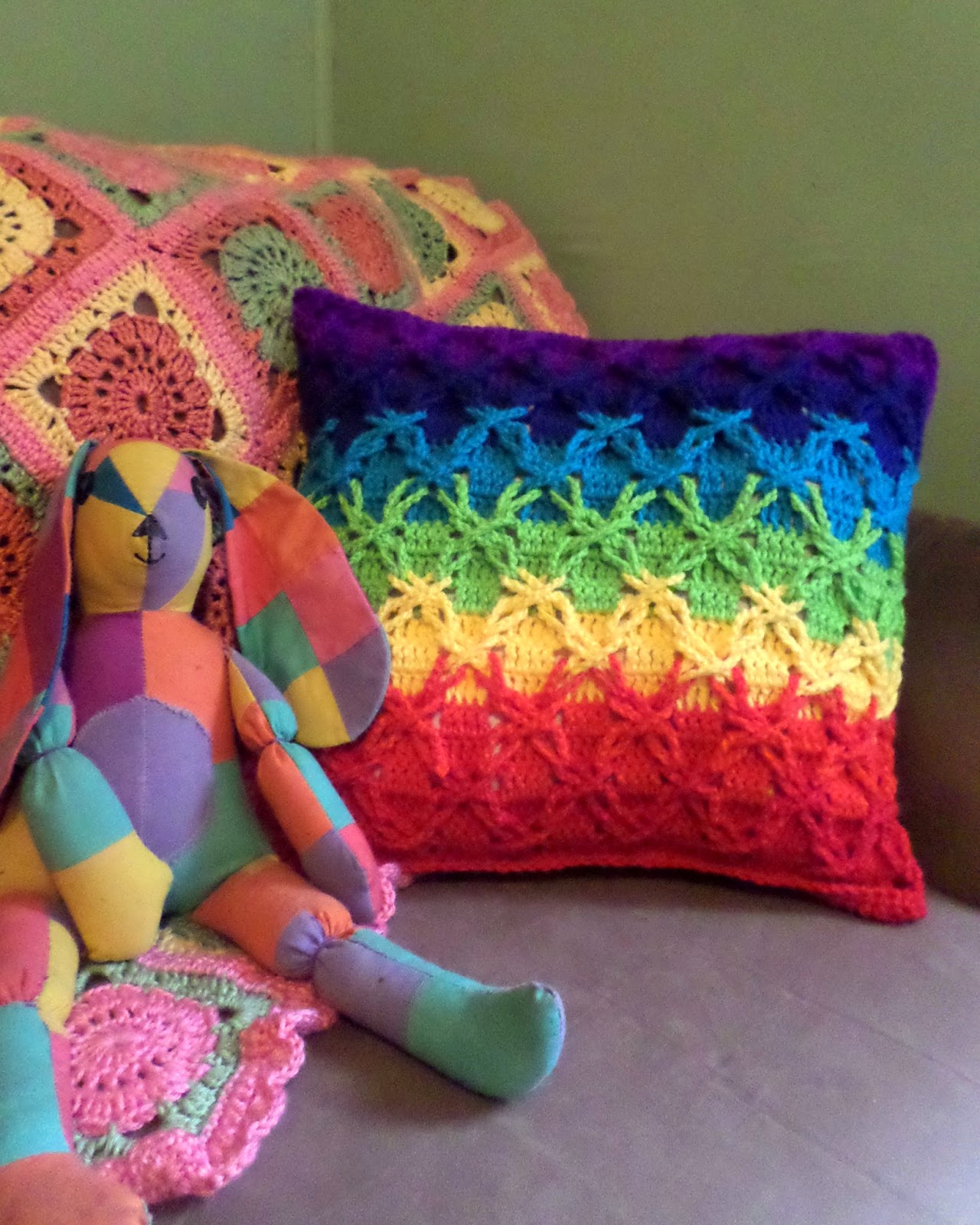 Probably everyone has seen the Polish Star Pillow on My World of Crochet by now. Or at least you have seen it passed around Facebook or Pinterest. When I saw it a couple of weeks ago, I just HAD to make one. Never thought I would get the time to. MADE the time.

Lisa's pillow was just lovely, and even though there was no pattern, I knew I could figure this out. How hard could it be? It looks a lot like Jacob's Ladder, only some criss-crossing of the loops. Maybe the loops are longer to allow for the reach. Maybe.... maybe there's a pattern somewhere.

There is. For a dishcloth. Smaller, but same concept. Polish Star Dishcloths by Dot Drake can be found on Free Crochet.com. You have to register to download anything from there, but it is free and, if you are like me, you already had an account and didn't know it.

The pattern in itself is plenty easy to make something larger than a dishcloth. What I did was add multiples of 4 to the starting chain. It is worked in an Extended Double Crochet (Edc)- which I think reasonably could be substituted with a treble stitch. At first I thought perhaps this is a tighter stitch and that is why it is used instead of the treble, but once you start braiding the fabric really compresses, so I don't think that a treble is going to leave a lot of gaps- not to mention you are using a G hook on Medium weight yarn, so that's moderately tight already. Having said that, though, I didn't mind the Edc after a few rows- you get the hang of digging that first YO out by itself and to be honest, until you are about halfway through the pillow front, the fabric continues to want to twist and get lost on itself (all those loops and narrow rows of stitching are not particularly stable), so no matter which stitch you use, it is going to take some straightening out before beginning each new row.

Okay, full disclosure. It didn't just turn into a square magically. I did a gauge swatch to get an idea of the width vs. height of my stitching to know how many rows it would take. I knew I wanted to do a rainbow, so it needed to be a multiple of seven rows, and adjusted my starting chain accordingly.  I began by chaining 59 and did 21 rows- 3 of each color and the last row of purple was without the loops because it made sense to me that you'd have nowhere to attach them to anyway. It turned out to be a good choice, In fact, I kind of wish I had done a 4th row of the purple: 2 rows without loops, because you can see that last row gets kind of lost. 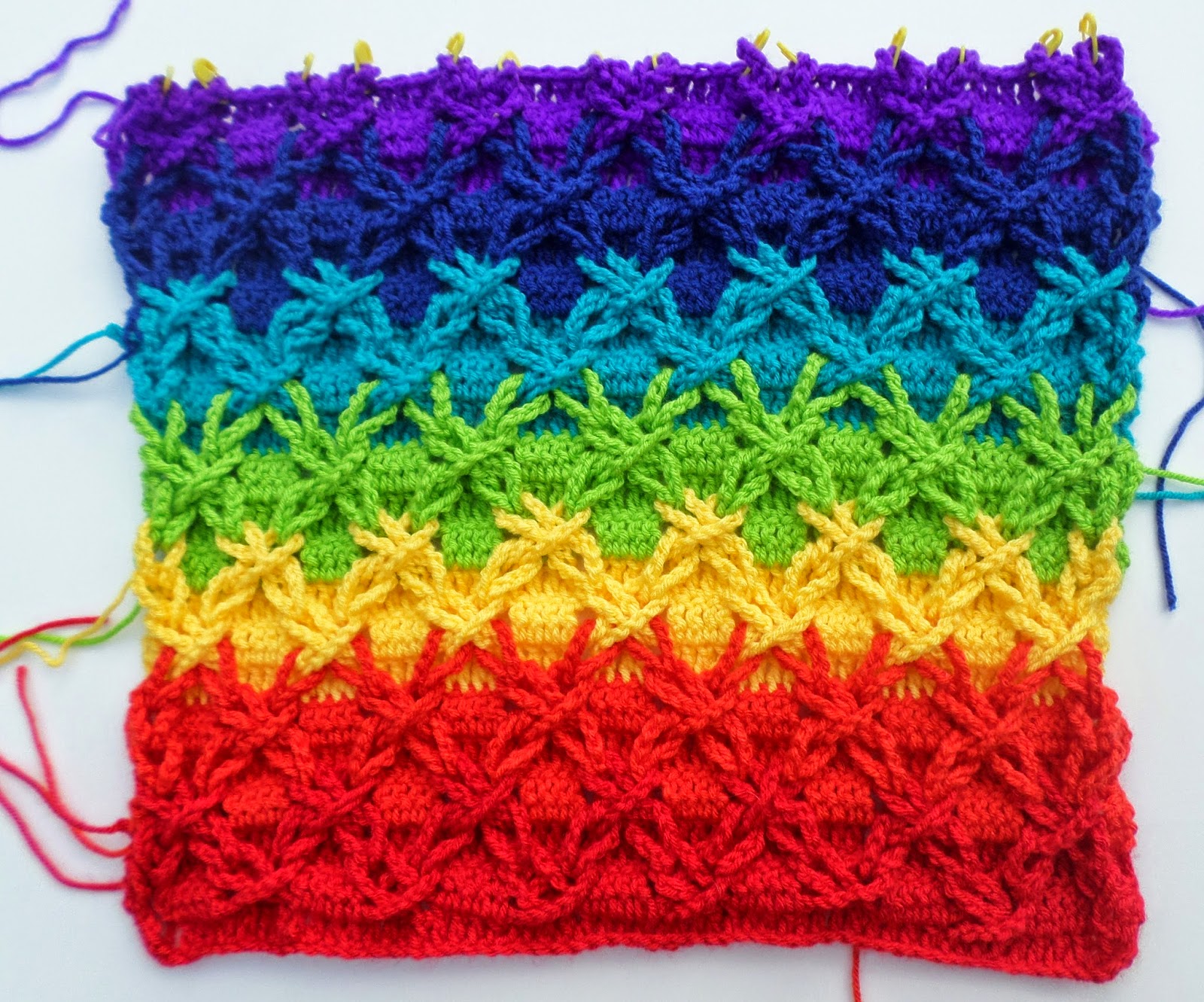 Everything you need to know is in the dishcloth pattern, really. My pillow front, after braiding, was about 18x18 inches, so I did a backing in just rows of dc to match that size (two pieces, actually, which I will explain later). There's a nice little diagram in the pattern about how to cross the loops- and even a video I saw the other day which served to further taunt me to MAKE THIS PILLOW. It's really not hard at all. You are crossing loops on one row, looping straight up on the next 2 rows. Every other crossing you stagger- the first row you ignore the loops on the edges and pair the ones between, then the second crossing row you pair each of them across, including the ones on the edge. The pattern says to always cross the same way (not sure why, but sure why not) so I put the right through the left each time. The only tricky part about it is to remember on the next row to grab that loop that already has a loop through it. It wants to hide. I had to redo a few here and there because I kept missing it. For this reason, I found it easier to 'cross, loop up, loop up' for each pair instead of coming back across each row like the video says. I kept track of them better that way and there was no more of the 'but where does this loop go? oh! I took it's friend away already! oops!' sort of thing. 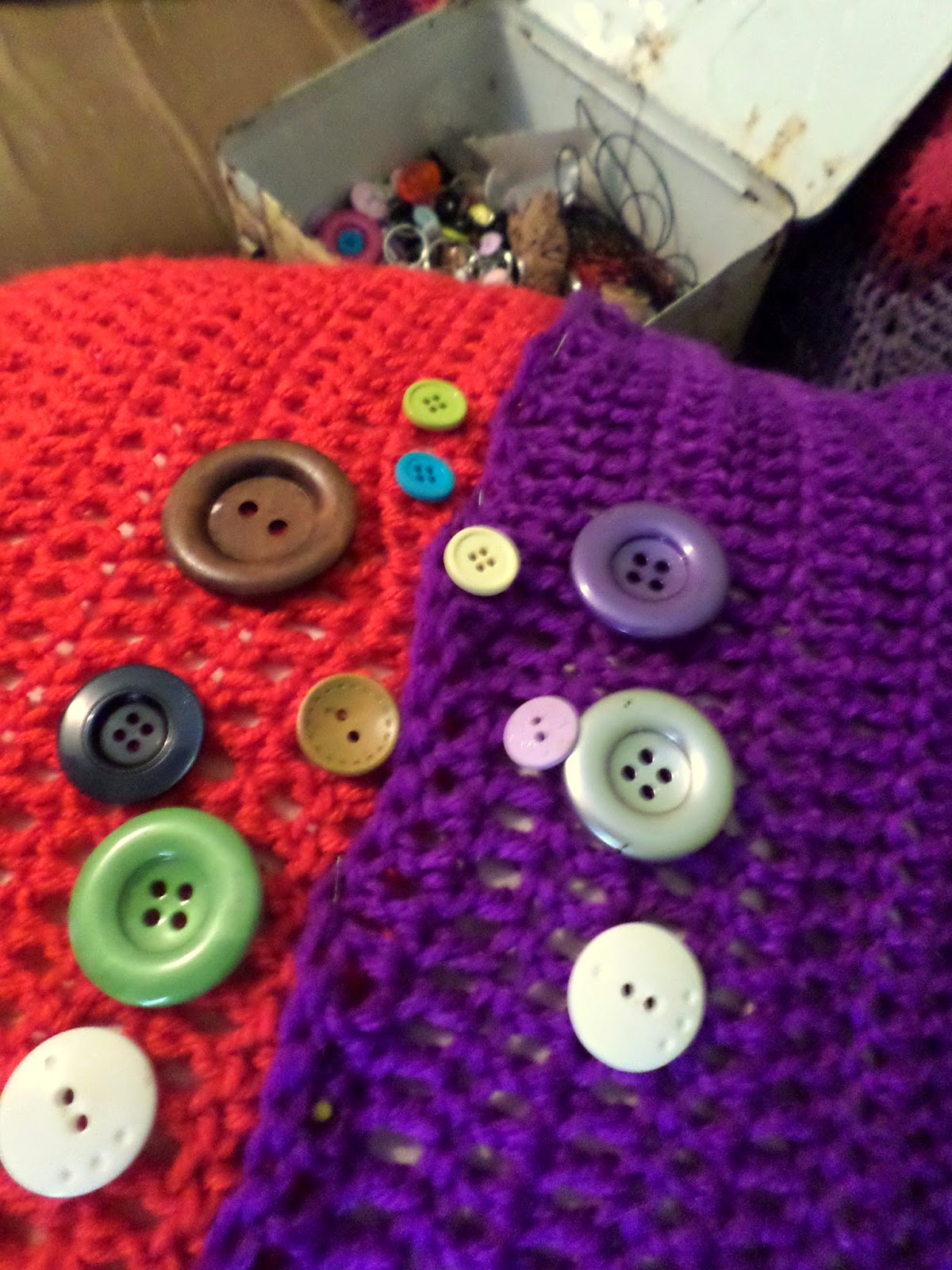 When I got to the top, I used locking stitch markers to hold the loops to the edge until I had the back made and could assemble it. I assembled it all together just by single crocheting through all the layers all the way around- removing the stitch markers and catching those loops as I came to them. I had to pin it at regular intervals first because the front wants to scrunch up on you. My pillow back I made with an I hook- because I really really really hate making rows and rows of double crochet (and honestly hate the way it looks, too). I wanted to make the backing split because there are cats in this house and cats get fur on everything and pretty much anything a cat touches needs to be washed at least once a month. My thinking was it is easier to wash the cover than the whole pillow, so I did about 2/3 from the bottom in red and the top down in purple, overlapping them about a row. This also served to satisfied my rainbow logic that red and purple should be touching, too. I will add some buttons across when I get the right buttons- my trusty rusty Holly Hobbie lunch box of buttons did not yield the perfect combo this time, but we will not hold it against her. She almost always has the button I need. SO... it's just pinned for right now... and hopefully when the time comes, I remember why there is 'buttons' on my shopping list. Probably should be more specific on that, huh? Or maybe I will just safety pin it and show people my at-all-other-times-compliant button lunch box and then maybe trick them into sewing, too!

At any rate, I love the pillow. It is garishly bright and clashes with my sherbet-colored throw (a Drops pattern made in Caron SS) and A.J.Bunny (made for my son by his Aunt Joanie twenty years ago now - Originals by Joan). I am not much of a decorator (I did mention cats and frequent washing of things cats touch) but I love a splash of color here and there. I think I will make a couple more of these in subtler colors for Christmas presents.

Actually, who am I kidding. I could barely spare the hour it just took to take pictures and type this!

Materials Used:
Medium Weight Yarn in 7 colors
G/6 4.00mm hook
14 locking stitch markers
18x18 pillow form (which I made, but this is a standard size, so you could just buy one)

My Yarn:
With exception of the purple, these are all Hobby Lobby I Love This Yarn Medium Weight. The purple is something by Lionbrand that I bought on clearance and I don't think they make anymore. It's a great color, but not a soft yarn, but okay for something not against your skin.

This Project has been submitted to Hookin' On Hump Day #81 at Petals to Picots and Hookin' on Hump Day #82 on Moogly. Thanks for the opportunity to share our projects with a wider audience!
.