It's been a long time coming. I've meant to do this for the last couple of years at least. Since my pattern-writing Mojo seems to be on vacation and I am coming to the end of my Christmas Present Making, I thought I would tackle it this week. I've got some commissions to do.. which I just remembered when I started typing... but I think this is more important. And maybe will help boost my love of pattern-writing again.

Back before there was A Dog In A Sweater, I had another website about pet things- mostly rodent care articles I had written for mags or other sites, but also some pet crafts like mouse houses made from Popsicle sticks and homemade cages and things. I don't keep rodents anymore- love them but way over cleaning cages and the heartbreak from how short a life they live - and with the cost of hosting going up so much, I decided to close the website. About that time- near the end- I had taken up crocheting and had written a few patterns. Dog Sweater Tutorial made its debut on the other site, but was quickly moved over to the blog when I realized how 'hooked' on crochet I had become.

And now it's being written all over again!

Today I finished the remake of the original sweater and got all the pictures edited and the pattern re-written and -formatted. Pagan modeled for me once again, more than five years later. It took a bit of peanut butter as she doesn't like the camera, but she loves sweaters and peanut butter and like every Rat Terrier, is all about pleasing her person. I was very proud of her and happy with the sweater! Great fit and a fast project (for a 13lb dog at least). The yarn is so plush and soft and worked up great even though usually self-striped yarn doesn't look as good in crochet as it does knit. It's nice to know the pattern still worked perfectly for me even though I've been making sweaters from a gauge formula for the last couple of years.

So, that pattern is completed- some of it the same but some rewritten and clarified and some new hints and tips added in. The layout is definitely better to follow- and will make referring from the other patterns a lot simpler. There are three more sweater patterns to move over and edit, though thankfully those pictures are a lot better since they are only 2-3 years old rather than 5. I learned a lot about taking better pictures after the first time- and had a better camera, too! Of course if I had any idea that pattern would be so popular, I would have tried a little harder to begin with.

Stats for the original Basic Dog Sweater Tutorial:
135,000+ unique page views
4000+ pins on Pinterest
Almost 100 projects on Ravelry alone
(Not counting the ones I've been emailed or nice people have posted on the Facebook page)
750+ likes on Ravelry
And linked from countless blogs and websites
I have even met fellow crocheters, when they found out what I did, tell me that they used my pattern to make their dog a sweater. That's a great feeling, knowing you helped so many people help their dogs stay warm!

In short, I had no idea that this pattern would be so popular. An update is way overdue, so while I am at it, I will make ALL OF IT better! 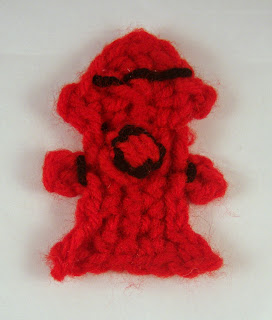 In addition to these 4 sweaters, there are going to be 2 new collar options and some special instructions on substituting fancier stitches for the typical hdc. Also, some added bonuses- a few applique's I designed once upon a time that never made it into a pattern. And after this is done, I shall be asking for volunteers to translate the pattern into as many languages as possible. I want everyone to be able to use this pattern and every dog to be warm and happy. I love that so many people care about animal welfare and happiness. It is not something I see locally in this small Southern town- quite the opposite sometimes and it breaks my heart- so this little thing- this simple pattern and how it is and can be used in the future, really gives me hope that people are truly moving toward a more peaceful co-existence with all creatures.

The Ebook should be out next week, I hope. After that, I've got 4 or 5 other sweater patterns I've been sitting on for a long time that I may just tackle. Kind of weird that I've come full circle, back to dog sweaters, in order to get back into the groove. That month I took off in September for family things really threw me off my game, but at least, in the lull, I've gotten most of my presents made and could take some commissions. I have missed designing, but I guess I needed a temporary change of direction. It's all good. I appreciate the continued support and the love you have for your critters!

The EBook is now available!