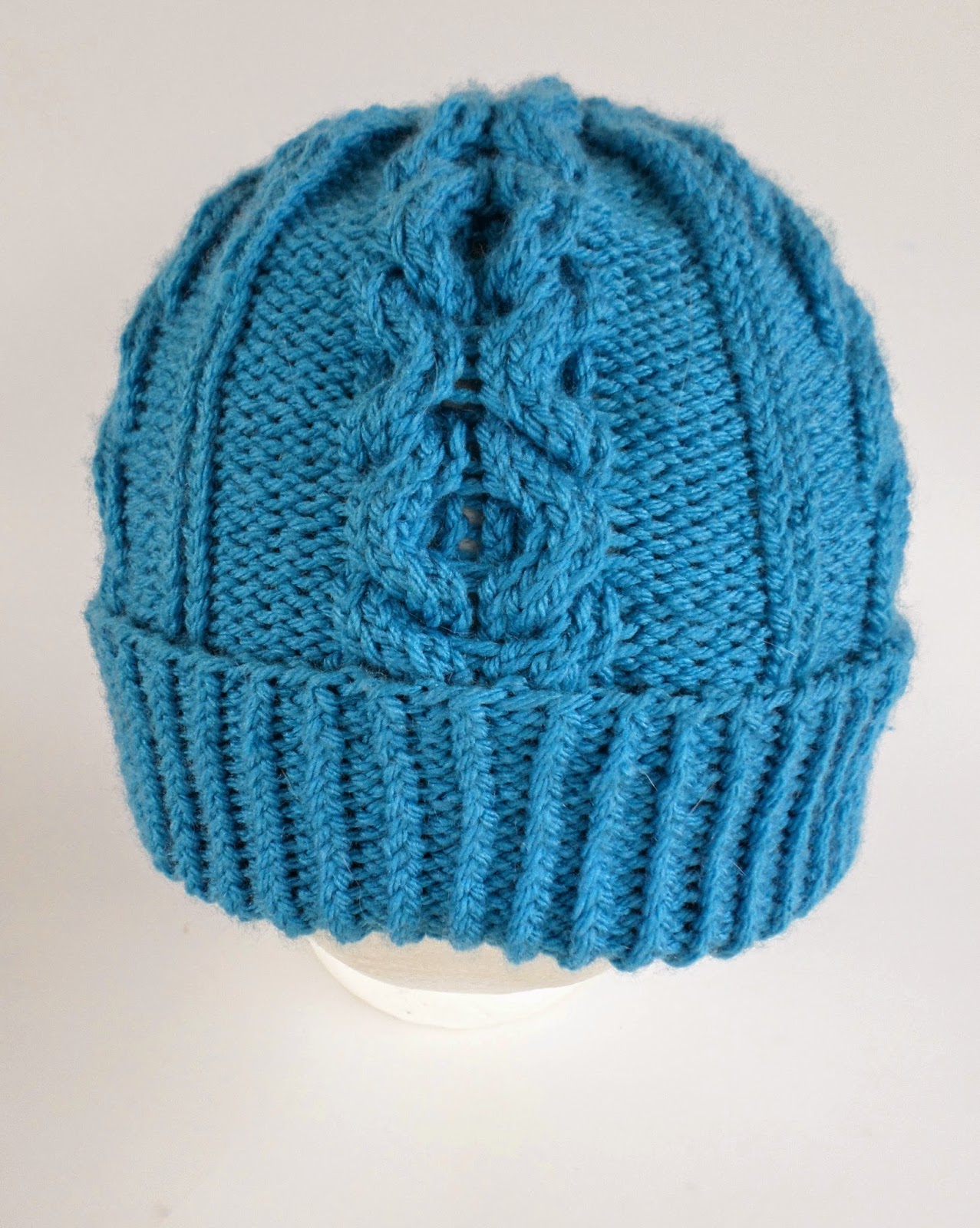 Finish Date: 3.10.15
Yarn: Neon Blue (ILTY)
I Learned: To fix mis-twisted cabled from 3 rows back AND that I have some not-too-bad crown-shaping instincts.
Grade: A

Good news! My circular set came in the mail! I am not ashamed to say that I bought a set of Boye off Ebay for $30. Unopened, new set that I guess someone didn't value very much. I had already been using the Boye that I had bought in pieces, so this ended up being cheaper than even just filling in the gaps of what I thought I might need (plus the Simplicity website never has all the ones you need at the same time so they want to get you triple on the shipping). Not to mention, this set the cables connections are actually straight and not at a weird angle, so they are definitely more suited to small projects like hats. I am ashamed of the amount of money I have spent on yarn and supplies in the last month, so if anyone hears me say 'I am going to buy' ANYTHING just slap me really hard. I refuse to be one of those people who spend more time collecting yarn than actually knitting/crocheting! But the cable needles- too good a deal to pass up and definitely needed. 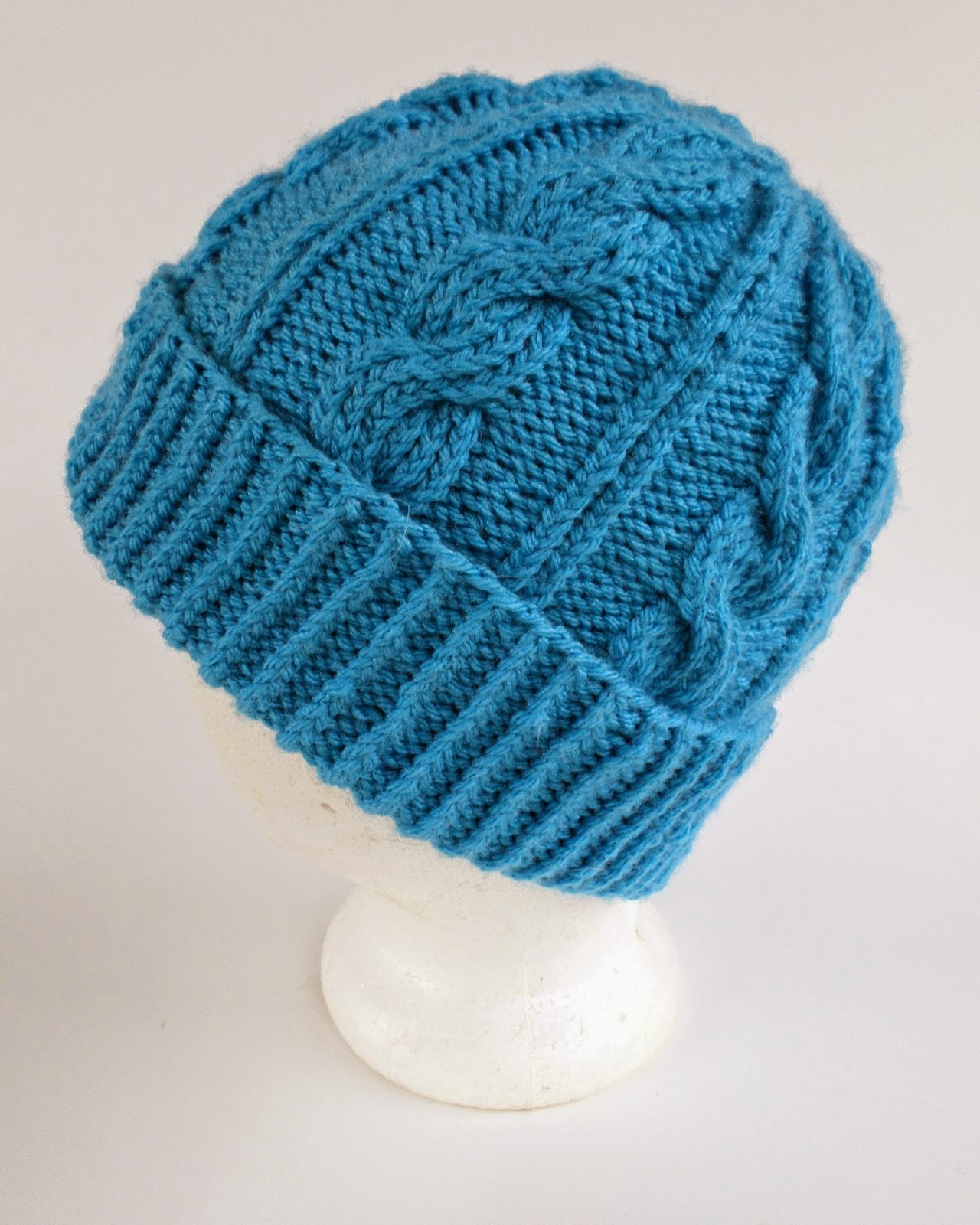 This was my first time knitting from a chart. I am not unfamiliar with charts as I have studied them before (they are like wonderful little crossword puzzles in code), and of course I have been crocheting graphs from similar charts and once upon a time tried to cross-stitch from similar-type charts (the stitching was my problem, not the chart-reading) so, I was not going to be intimidated. I CAN do this.

(Actually, I generally think that I can do things, even if I can't. I'm sort of a jump-in-head-first kind of gal. Gets me into trouble a lot!)

I was instantly confused, though, as it seemed there were 2 different symbols both meaning KNIT and the pattern had no key. I was clearly outside the true knitter's world looking in that I didn't just KNOW what that was. When I looked up what the one symbol meant, CYC says that was a bobble. Pretty sure there were no bobbles on the hat. So... I wrote to the designer... 'hey what does this symbol with the black circle mean in your particular pattern?' She replied that she updated the file to include a key. HOW NICE! RIGHT? Unfortunately, I could never find the new version of the pattern. The same file was downloading as before, which only included a key for the cables. So, as not to appear like someone that doesn't know how the internet works or be pesky to someone that is nice enough to give away an awesome pattern for free and had already answered my question ONCE, I just proceeded with the pattern as if that symbol also meant knit. Maybe it didn't, but it sure looked like it in the pictures of the hat! And it turned out just fine on mine! 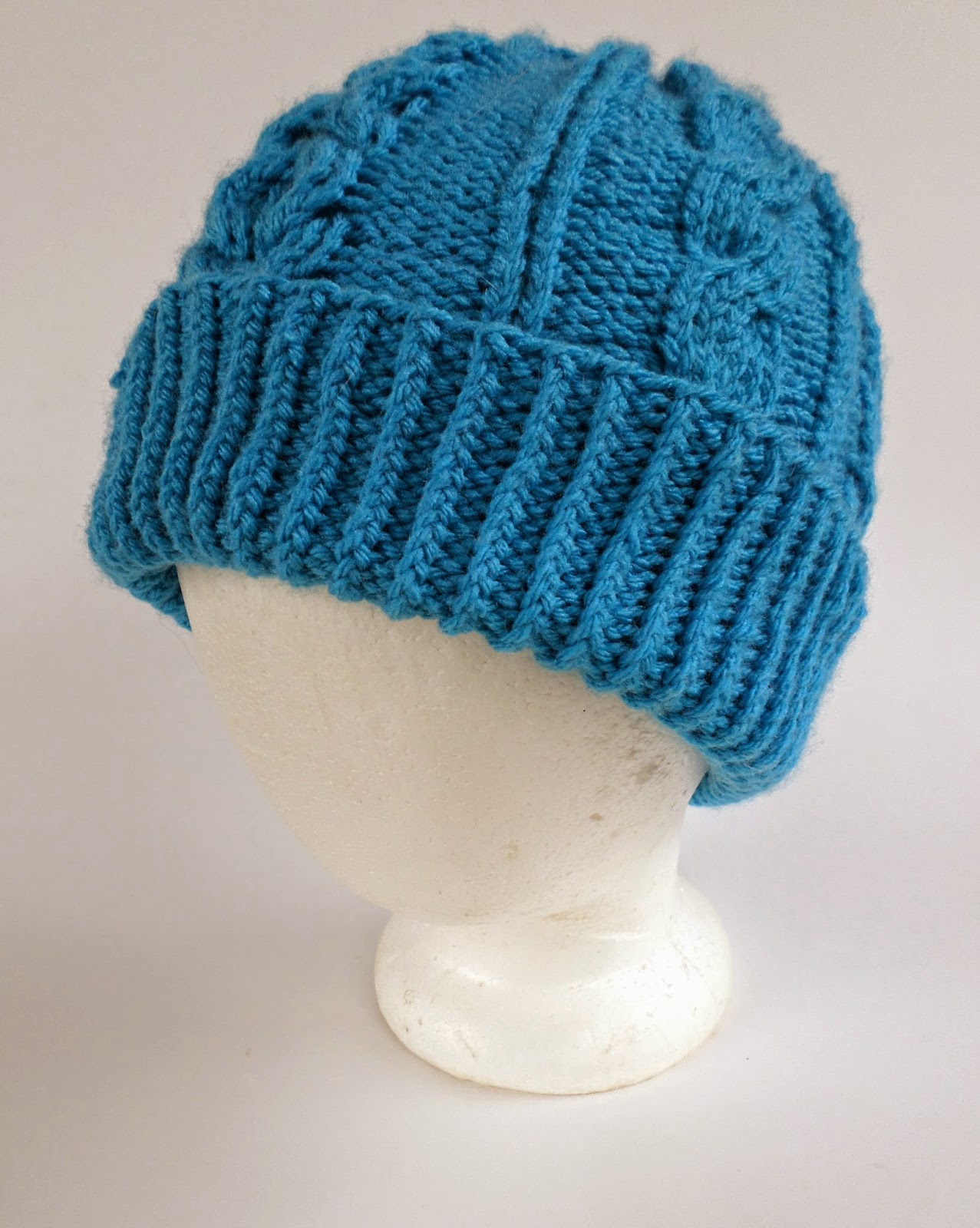 This was a LOT of ribbing- which is like having salad for days while staring at a cake. I had to size down twice on my needles to make gauge. The yarn was nice enough to allow it, though. The neon ILTY have a different feel to them than the others. They are less fuzzy and seem more like the braided-type Aran yarns you get from Europe. I had used this blue in small parts in other projects and it's probably the most beautiful color of blue EVER. It doesn't really seem like a neon- just a very rich color- unless you happen to go somewhere with black lights and then it glows like a proper neon color. :)

I am still waiting for my cable needles to arrive, so am still using a DPN to hold my stitches. I am getting so used to this I hope the cable needles don't seem weird when they get here, though, I assume, I would have to stick an end through part of the stitches to keep it from falling out, so I think it will be a faster process. 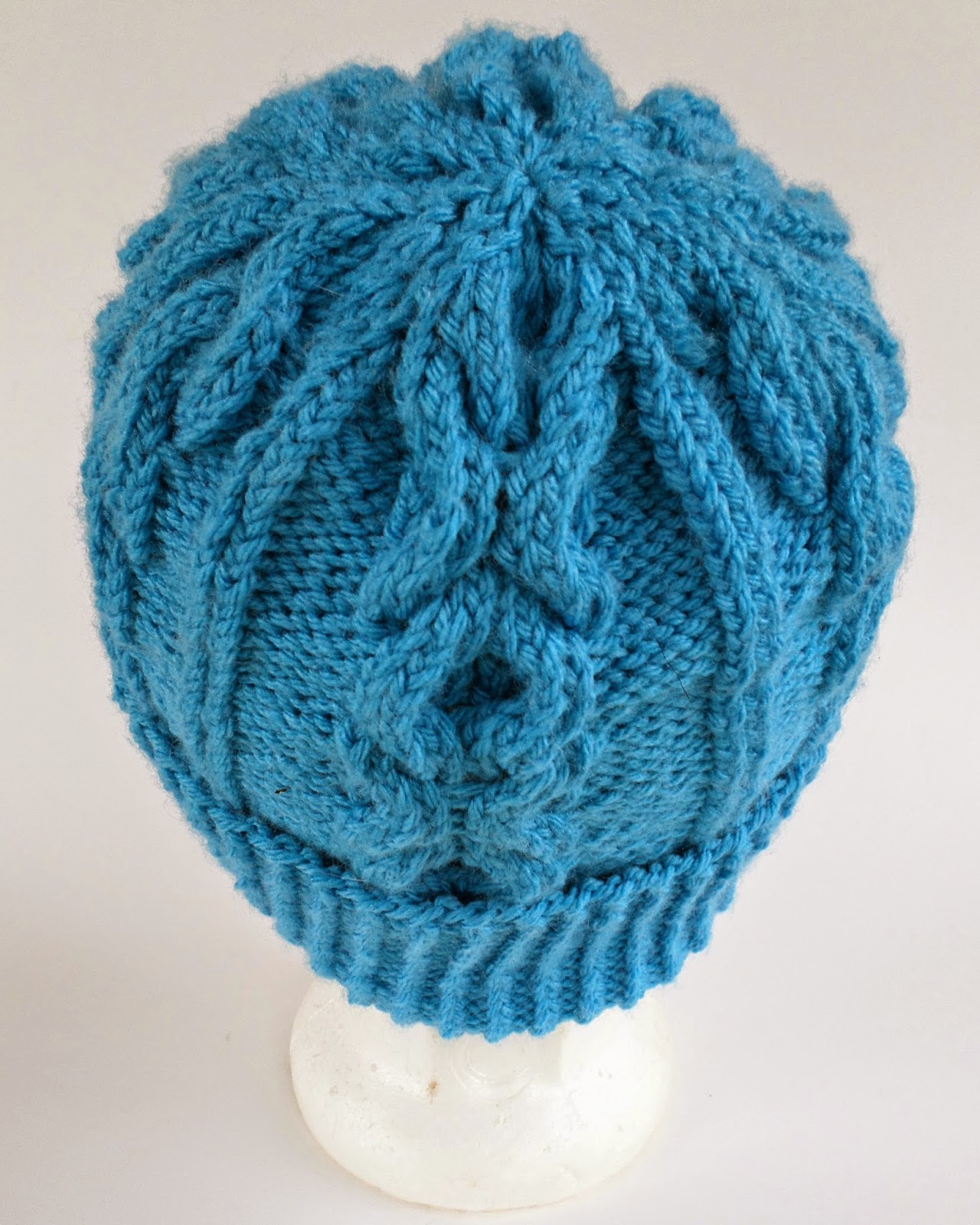 I ended up writing out the chart in longhand. Mostly this just helps me to remember it after I've written it down. But also I needed to keep track of my rows since this is a 16 row repeat.

Into the second repeat, I screwed up and got a cable leaning the wrong way. I did a search and found THIS by Yarn Harlot. It wasn't too hard to fix- since it was only 2 rows back. The stitches are a little looser in that spot but don't bother me as much as the cable going the wrong way did.

Okay- maybe I just didn't know any better, but when I got to the crown shaping, seemed like either the chart is backwards or I am working it backwards. So... I just sort of loosely based my decreases on the pattern and followed my instincts, new as they may be. .... Okay according to THIS, Reading the chart right to left as I was doing is the correct way, so I guess the chart is backwards. It did seem odd that the row numbers were at the end instead of the beginning. Left-handed pattern, perhaps? Is there such a thing? Anyway... I could just read the decrease instructions backwards, too, but seemed easier just to go with the more obvious decreasing stitches you won't need to cross again. 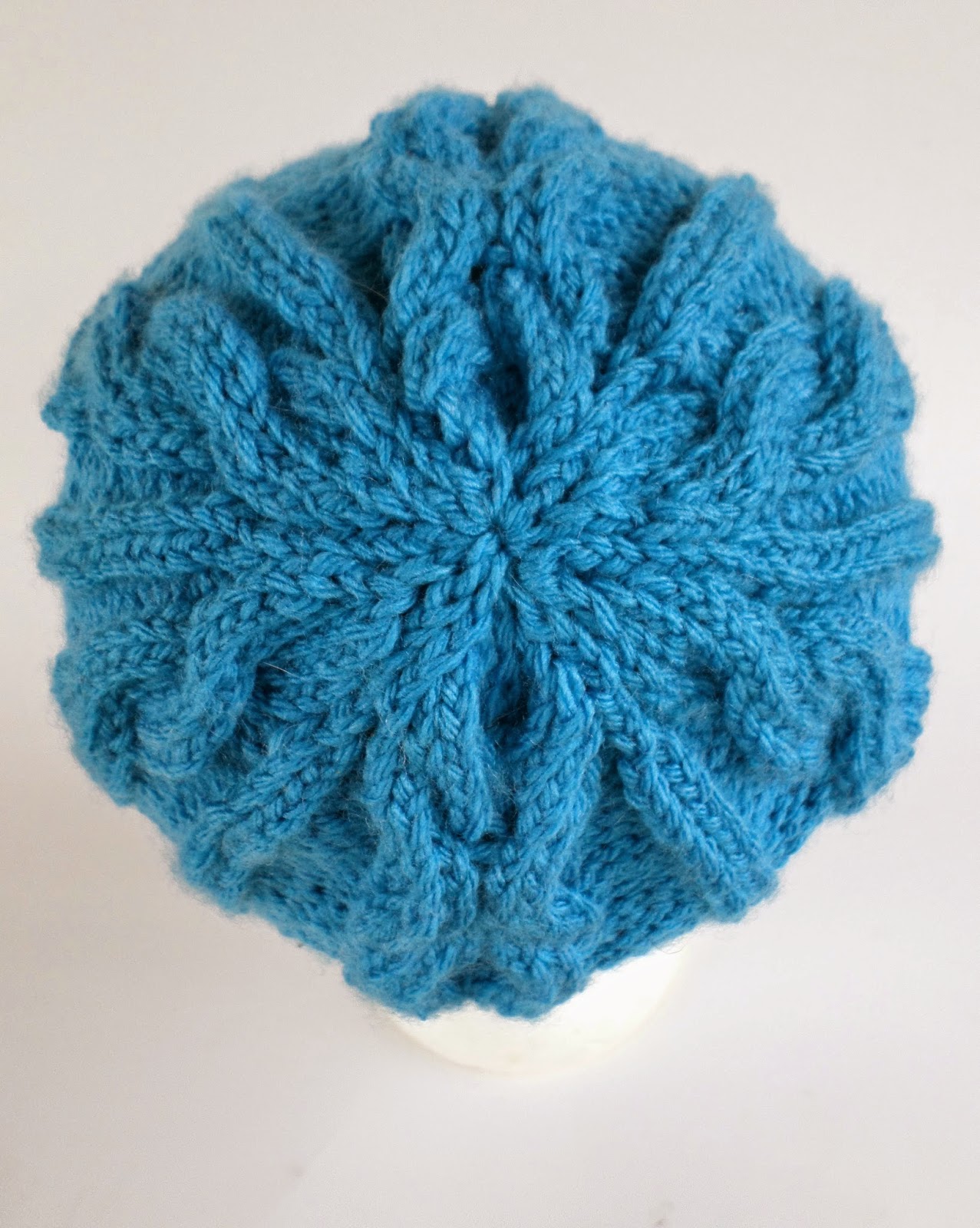 I like the shape of my crown a lot better than the original. Very domed and well-fitted, completely by accident. I love the color and the fit and other than one spot in the crown where I began a cable 1 stitch too early, I think I managed to not make or otherwise correct any mistakes. Unfortunately, fixing mistakes I did get some too-loose stitches here and there and also some yarn splitting, so it is not a perfect hat but still think I did a damn good job, taking into account that this is the most complicated hat I have knit thus far.